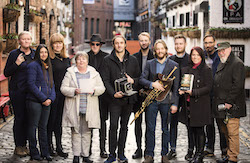 Awards under the Artists Career Enhancement Scheme (ACES) are made annually to professional artists working in music, visual arts, drama, dance, literature and participatory arts and are among the most prestigious awards bestowed by the Arts Council annually. The artists include five visual artists, two poets, three writers and seven musicians.

In addition to receiving a bursary of up to £5,000 each, many of the 17 artists have been partnered with a professional organisation to help each of them to deliver a major new creative work. Those organisations include; Moving On Music, Millennium Court Arts Centre, Centre for Contemporary Art in Derry and Paper Studio in Northumbria, among others.

The Artists Career Enhancement Programme (ACES) forms part of the wider Support for the Individual Artist Programme (SIAP) administered by the Arts Council of Northern Ireland annually. As part of its continuing commitment to supporting the development of individual artists, the Council made 277 SIAP awards to artists in 2016/17 totaling £592k. Since its establishment in 2010, 117 artists have been supported through ACES. Visit www.artscouncil-ni.org for information on all funding opportunities.