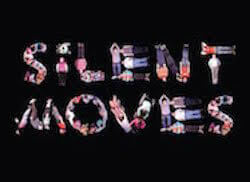 The series Modern Ireland in 100 Artworks, a collaboration between The Irish Times and the Royal Irish Academy, is a transverse section of Ireland’s struggles with modernity since 1916. The works chosen are drawn from literature, theatre and the visual arts, not from music, film, television or radio. They are simply a kind of chronology of the Irish imagination working through certain forms. They lay out not a clear pattern but a thread through a dark and winding labyrinth. The hope is that they capture, or at least illuminate, the spirit of the times in which they were made.

As part of the selection for 2015 the following works and artists were nominated by the Irish Times with the public voting for the top entry.

The winning entry was Aideen Barry’s Silent Moves. Commissioned by the ADI and Arts Council of Ireland together with Cork, Mayo and Galway County Councils for the IGNITE AWARRDS 2014/2015.
View Silent Moves here: irelandignite.ie/?cat=4