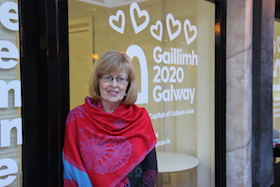 Galway 2020 is delighted to announce the appointment of Ms Aideen McGinley as a Director and Chairperson designate of the Board. A national trustee for Northern Ireland on the BBC Trust, she has 37 years local and central government experience in Northern Ireland being the first woman CEO in NI local government and subsequently the first woman Permanent Secretary in central government when she took up post, on devolution, to create the first Department of Culture, Arts and Leisure and then moved to the Department of Employment and Learning where she was responsible for further and higher education, employment and skills.
Reflecting her interest in regeneration she took up a secondment in 2009 as CEO of ILEX, the urban Regeneration Company for Derry-Londonderry, where she was instrumental in developing the £400m, 10-year regeneration plan, building the symbolic peace bridge and successfully securing the inaugural UK City Of Culture title 2013 for the city.

Aideen has a particular experience of effective stakeholder engagement across a range of interests and sectors from urban and rural regeneration , social entrepreneurship and Creativity, to women and leadership development.

She has been involved in a variety of roles in the non-profit sector, which coupled with her public and private sector experience and her ability to create integrated policy and delivery on the ground,has been recognised in her award of an OBE and an honorary degree from the University of Ulster.

She is an associate of Future search Associates, Co Chair of the Carnegie UK Trust initiative on the measurement of well being in N Ireland and a member of the mayoral commission for creativity in Liverpool. In addition, she is a jury member for the Department of Culture, Media and Sport’s UK City of Culture Selection Panel.

Galway 2020 is delighted that Aideen has joined the Board as Chair designate and are certain that her experience and skill set match her perfectly for the role.