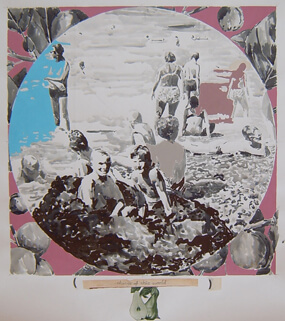 If one thing is true in the life of an artist (whatever stage of your studies or career) it is that no matter how much you think you are making your own decisions and setting your own goals, it is so often others who are actually creating the pathways for you. It may be an interview panel for a course you are applying for, or a job at an art college, a selection panel for a funding round or for an open exhibition, or a curator looking for particular artists that will fit with a concept for a show.

Of course within all of this you can be well prepared and strategic to a point. However, my experience as an artist has been that, to begin with, by being actively engaged with artist-run initiatives, you can take ownership of your career development straight away. Another fundamental element within the attitudes of the best artists I know is that they have kept an honest and open approach to the actual making of their art, with a focus on, and a rigorous application to, their own vision of a personal model of practice. By this I mean that they try to shape and advance their own career development through the actual practice of art making, regardless of trends and fashions, which in turn eventually creates significant opportunities in some shape or form.

It can be this sort of approach to an artistic life that makes such opportunities (or put another way, the lucky breaks) feel like ‘the right thing’ when they do come along and, in turn, feel more rewarding and fulfilling. In most cases it is usually an uncontrollable series of events, revolving around the art practice itself, which take you from situation to situation.

For me, an early career synopsis might read as follows: I thought I would go to art college in Edinburgh because it was all I knew to do as a 17 year old. The brother of my girlfriend at the time suggested I put down a second choice – he had been to Gray’s School of Art in Aberdeen and said it was good to get away from home. In truth I didn’t mind where I ended up, I just wanted to get into art college. My first lucky break: Edinburgh College of Art was not particularly interested in my portfolio. Instead I got a place at my second choice, and a move away from home broadened my horizons.

After four cold and happy years in Aberdeen, in the days when you really could be an art student full-time (and I mean full-time, painting at college all day and evening, and then painting more in your bedsit accommodation at night), I and most of my peer group of 1990 aspired to getting onto one the London postgraduate MA courses (Chelsea was my intended destination) or alternatively Belfast. The MA in Fine Art, as it was known then, at the University of Ulster, was in the habit of sending out to potential undergraduate applicants a very enticing promotional package showing current MA students hard at work in their studio spaces (some windswept and interesting female students I noted!). It was headed-up by a course leader who was interesting and inspiring – the performance artist Alistair MacLennan. It was he, and MA tutors Slavka Sverakova and Tony Hill, who gave me my second lucky break.

Coming to Belfast gave me a much stronger sense of connecting my studio practice to things outside of art college – more than I had ever been aware of as an undergraduate student in Aberdeen (where art college life seemed the be-all and end-all of everything). I became increasingly aware that artists in Belfast were very good at initiating their own projects, in an often difficult climate. Whilst on the MA, visits to a tutors’ studio collective and to the newly formed Flax Art Studios, set up by some recent MA graduates (then on the Crumlin Road – we walked there in daylight, and in typical fashion Alistair MacLennan funded the after-dark ride home by taxi), gave me the inspiration and incentive to remain in Belfast after the MA. 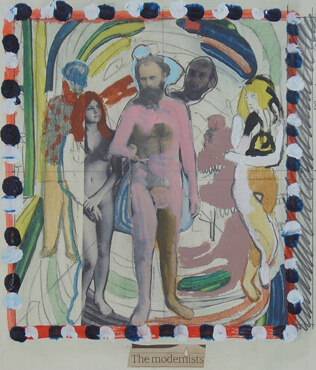 Not wanting to stray too far from the apron strings of the art college on York Street, a chance meeting with artist Nuala Gregory (I seem to remember it being a Spar-based encounter, buying cheap sandwiches to see us through the day) brought me the offer of a shared studio space in Cathedral Buildings very nearby. This was my third lucky break, as the studio was a sub-let from artist Deirdre O’Connell, who was off doing the (now sadly demised) Arts Council of Northern Ireland PS1 New York scholarship, never to return. This period at the start of the 1990s seems to me to have been the beginning of a burgeoning, artist-led art scene that has over the years witnessed a proliferation of projects and spaces, many of which survive still.

Cathedral Buildings Studios joined forces with Egg Studios at the other end of Lower Donegall Street (still there, in the form of PS2 studios and gallery) to create Six-into-18 artists’ projects. In 1993 we organised a major-scale, artist-led exhibition, entitled ‘Presentense’, located in the newly renovated, but partially vacant, Ross’s Court shopping centre. This included (young!) artists of the time such as Mark Orange, Lorraine Burrell, Sandra Johnson, Aine Nic Giolla Coda and Willie Heron, to name but a few. This led on to a similar follow-up show, called ‘Set Up’, in vacant commercial premises in Derry.

Having attracted Arts Council of Northern Ireland funding for these, I then went on to join forces with another group who were interested in developing artist-led initiatives. Out of this, in 1994, came Catalyst Arts at Exchange Place (off Lower Donegall Street). This has continued to thrive at different locations around the city centre. Of all the city’s artists’ organisations, it truly is the Doctor Who of Belfast! I was a director in its original incarnation from 1994 to 1996 and, as well as providing invaluable experience of running exhibitions, it also gave me opportunities to develop my own practice with trips to New York and Alabama in 1995.

Such international trips are so often the result of artists being pro-active and seeking to create opportunities for themselves: making funding applications and looking for reciprocal groups to exchange with. Other such projects I have been lucky enough to be involved with have been to Iceland, again in 1995 (organised by the artist and lecturer Sean Taylor), Poland in 1996 (organised by Amanda Dunsmore) and Slovenia in 1998 (Sean Taylor again, along with Brian Connolly and Aisling O’Beirn). Another mad-capped venture saw a group of us flying out to Documenta X in Kassel in 1997 – not to participate, but to stage a fringe exhibition of our own. Two hired Nissan Micras, a slide projector and an electricity generator later, we were up and running in a car park close to the main event, showing examples of our own work.

Each of these experiences were important ways of getting international venues onto my CV, and none of them would have happened had it not been for the artists behind them. They were also key to me getting my first job in an art college, at Limerick School of Art and Design in 1997. I was lucky to get this at a time when your activities as an artist, and the potential for what you could bring to your teaching role through these, were the main criteria for successfully securing a lecturing post. However, after six rewarding years as a lecturer in painting, I found that I missed many things about the North and took the risk of a career break in order to see what might happen both in the studio and for my wider prospects.

This period of time was one of the rare occasions when a mixture of self-initiated decision-making (the career break) and focus on studio work, seemed to lead to an ideal set of outcomes. I took up residency of a studio at Queen Street in Belfast, and in 2004 I was selected for, and took one of the prizes at, the John Moores 23 Exhibition of Contemporary Painting in Liverpool. I was also a recipient of an Arts Council of Northern Ireland Major Award in 2006. This allowed me to concentrate for an extended period of time on exhibition opportunities. In 2007 I was approached by Peter Richards at the Golden Thread Gallery in Belfast to curate an instalment of the ‘Collective Histories of Northern Irish Art’ series. My concept was to organise a show that explored the interplay of imagery between contemporary Irish painting and photography. The exhibition ‘The Double Image’ was the result of this.

In recent years, I have shown twice at the Third Space gallery in Belfast – with exhibitions entitled ‘Dunkelbunt’ and ‘Hot and Cool’. Last year I was again selected for the John Moores 2012 Exhibition of Contemporary Painting. I am currently working towards a three-person exhibition with painters David Crone and Mark McGreevy at the FE McWilliam Gallery in Banbridge, Co Down.

I now work as a lecturer on the Fine Art degree course at the University of Ulster in Belfast. In that regard, there is a sense of a circle being completed, which stretches back to my time on the MA there. Such a circle is sometimes difficult to circumscribe entirely by your own hand; a mixture of dedication, happiness in the practice of art – whatever the circumstance – and decisions made by others, have all helped along the way.

First published in the May / June 2013 Visual Artists’ News Sheet