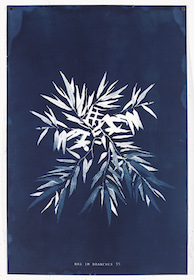 Rachael Gilbourne will participate in a public talk with Alan Butler on the occasion of his current exhibition HELIOSYNTH at Green On Red Gallery.

HELIOSYNTH is the artist’s first exhibition in a commercial gallery and comes at the end of a plethora of exhibitions and curated online shows in Ireland and internationally from Belgrade to Skibereen. Butler has garnered a reputation for being one of the most insightful and inventive artists whose “raw material” is the virtual. His use of digital simulacra has unexpected, ravishing and perplexing philosophic results and is as close to the pioneering technologies of the early 19th century daguerreotype and cyanotype as it is to the silicon technology in your pocket and on your desk.

Rachael Gilbourne is a curator based in Dublin. Currently Assistant Curator of Exhibitions: Projects & Partnerships at IMMA–Irish Museum of Modern Art, Gilbourne also works as an independent curator, often in collaboration with Kate Strain under the aegis of RGKSKSRG. She is co-founder and co-ordinator of Visual Arts Workers Forum, and a member of the Board of Directors of Black Church Print Studio and the Royal Hibernian Academy School.