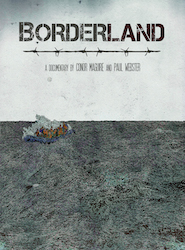 A4 are delighted to host a screening of Borderland at the A4 Gallery. Borderland explores the Syrian refugee crisis along Europe’s borders, the result of the greatest mass migration since World War II. The film features interviews with refugees, volunteers, Colm O’ Gorman of Amnesty International, Sue Conlan of The Irish Refugee Council and Eva Schloss, holocaust survivor and step sister of Anne Frank. The film is produced and directed by two Dublin based filmmakers, Conor Maguire and Paul Webster.

After the screening, Co-Directors, Paul Webster and Conor will discuss the inspiration for the film, as well as the production and distribution process.