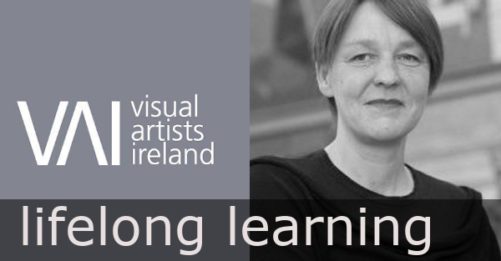 VAI and Project Arts Centre invite you to attend an Artist Talk with Ines Schaber, an artist and writer based in Berlin and Los Angeles. In recent decades, artists, photographers, curators, and critics have caught archive fever, and archives and their processes have often come to dominate discussions in and around photography. This has particular consequences for documentary and artistic practices. In response, Ines Schaber has conducted a series of works that begin with the assumption that an archive is not only a place of storage, but has become a place of production, where our relation to the past is materialised, and where our present writes itself into the future.

In her work, Schaber has examined a set of questions that underlie archival practices. The projects, case studies, writings, and artistic works she has produced seek to trace new or alternate archival practices. The aim of the work has not been to find or create another institutional archive per se, but to develop a practice in which the set of problems that are produced is part of the process we engage in when encountering archives.

Schaber’s presentation in Dublin will focus on The Workhouse (Breitenau Room), a project that was produced by curator Lívia Páldi in the context of dOCUMENTA (13) in 2012, and conducted in collaboration with sociologist Avery F. Gordon. The piece engages with the history of the former monastery, workhouse, concentration camp, Gestapo camp, and girls’ reformatory of Breitenau, a small village in the vicinity of Kassel, Germany. Over time, Breitenau has confined many people considered extraneous and disposable, subjecting them to a regime of punishment and correction. Consisting of photographs, a curtain, text, and audio files, The Workhouse (Breitenau Room) presents glimpses of ‘fugitive knowledge’ that emerges in and around the site. This knowledge, what Foucault named ‘subjugated knowledge’, contains two aspects: repressed by official knowledge on the one hand; and marginalised or discredited on the other. Searching for traces of this contested knowledge, that might be present in any archive, Gordon and Schaber suggest a different reading of a place like Breitenau.

The Workhouse is also the name for a series of activities and projects (called ‘rooms’) that were organised by Ines Schaber and Avery F. Gordon between 2010 and 2012. Overall, The Workhouse’s activities are broadly concerned with the cultivation of ways of living and working that are independent of, autonomous of, outside of, in opposition to, as an alternative to, or, alongside of but not entirely inside of, the dominant terms of social order. The traditional workhouses, first developed in the late 16th century and reaching their peak in the 19th century, were prisons where (predominantly poor) people, who refused to work or stay put or behave like ‘good’ workers and obedient social subjects, were confined, punished, and corrected. By contrast, the Workhouse activities proposed by Schaber and Gordon were designed to provide a hospitable space for the critical and imaginative thinking/practices of ‘bad’ workers, idlers, strikers, collaborators, runaways, and other individuals who do not want and need conventional ‘correction’ or ‘re-education’.

The Workhouse (Breitenau Room), the second iteration of the series, was installed at dOCUMENTA (13) in the Handwerkskammer (Chamber of Crafts) in Kassel. Parts of it now permanently reside at the Gedenkstaette Breitenau, a memorial, study centre and archives in Guxhagen which engages with the site’s complex history of violence, exclusion and discrimination. The third iteration was presented as a 3-day workshop led by Gordon and Schaber and organised by Pip Day and el instituto for Spatial Practices in Revolution in 2011 in Mexico City.

INES SCHABER is an artist and writer based in Berlin and Los Angeles, and teaches at the California Institute of the Arts in the program of Photography and Media. Her artistic work addresses the complexity of image-making by investigating the hidden layers of historical evidence. Since 2004 she has been engaged in the working archive, a series of case studies, texts, and artistic works through which she examines and tests notions of the archive. Usually triggered by a photographic record, her often collaborative projects explore the construction of memory and how new readings are generated over time. Often constructed as mixed-media environments, her installations are designed to offer different positions from which an image can be viewed and analysed as visual and social documents. Recently, she published a series of five books named Notes on Archives (Archive Books and Camera Austria Graz).

Ines Schaber studied Fine Art at the Hochschule der Künste Berlin, architectural theory at Princeton University as a DAAD fellow, and received her Ph.D. from the Visual Cultures/Centre for Research Architecture at Goldsmiths, University of London. Her dissertation entitled Obtuse, Flitting by and Nevertheless There – Image Archives in Practice examined a set of questions that underlie archival photographic practices, seeking to trace new or alternate modes of archival practice, in order to meet contemporary needs and methods of knowledge production.

Ines Schaber has taught at many European art schools, and also at CalArts as visiting faculty for the Program in Photography and Media in 2014/15, before joining its core faculty.

We welcome Ines Schaber to Ireland, in partnership with Project Arts Centre, as part of VAI’s preparations for our 2020 40th Anniversary Lifelong Learning Programme.