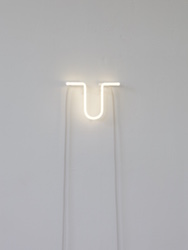 Joanne Reid was announced as the recipient of the Basic Space Residency Programme (BS / RP), running August 15 – September 30, concluding with a presentation of work.

An MA graduate of Art and Research, IDAT, Joanne’s practice incorporates industrial and consumer packaging, discarded steel production parts, concrete, plaster and neon tubing. Combining traditional materials and industrial elements, many found or discarded in the urban environment. Playing on presence / absence within the architecture of the white cube space.

FOOTNOTE from Basic Space:
Basic Space’s artist residency was selected by Nom er Piat which wasn’t what Lee Welch was expecting when he asked Raimundas Malasauskas to choose a recently graduated artist.

Nom er Piat sounds like a person who reconstructs their name regularly, as in a collaborating agent of disappearances and reappearances. Not unlike identity theft or being the 5th funniest person in a thread bare roster of friends. It’s these transitory infractions that are Nom er Piat’s introductions.

For example Nomer Piat has an almost uncanny ability to guess what people are about to do, because of his extreme sensitivity to body language, but he’s also trapped in the moment, incapable of projecting the consequences of his actions back and forward in time. In a similar way that hares can run uphill fast – please remember – when they want to run downhill they have to zigzag. This is because their hind legs are taller than their fore legs.

Note on selection; If Joanne went by the name Jo Jo she would be linked to Nom er Piat through smell and within logic this difficult selection was made on that basis. Congratulations Jo Jo.