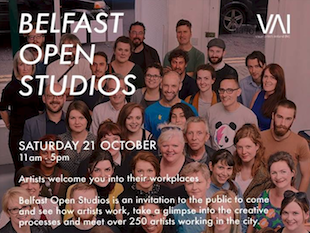 Belfast Open Studios, now in its sixth year, is an opportunity for the public to come and see how artists work and to take a glimpse into their creative processes.

Belfast is home to over 250 professional artists; painting, drawing, performing, filming and creating. A public open day on Saturday 21 October will enable you to see behind closed doors, in nooks and crannies of the city, artists are at work developing the seeds of ideas that result in artworks often shown in galleries, museums, art centres, artist-led spaces and various venues.

Fifteen studios across the city are opening their doors from 14 October to 5 November for this unique, free event. We’re delighted to welcome four new studio groups to the Open Studios portfolio: Belfast Bankers in the East, Duncairn Arts Centre in the North, Studio Souk in the city centre and Embrace Studios in the West, who will be launching their brand new space and programme during Belfast Open Studios. Other participating studios include: Array Studios, Artists at the Mill, Cathedral Studios, Creative Exchange, Digital Arts Studios, Flax Art Studios, Lombard Studios, Orchid Studios, Platform Arts, Pollen Studios and QSS Bedford Street.

Accompanied by an extensive workshops and events programme, including a Visual Artists’ Caf’ which introduces the different spaces and initiatives to the public and peers, a series of talks, Speed Curating and Clinics events; this is the most packed programme to date. Belfast Open Studios is delighted to partner with Belfast International Festival for the sixth year in a row and to represent its primary visual art programming. All event tickets can be purchased through the Festival website.

Sponsored by local artisan tea makers Suki Tea, Belfast Open Studios events offer a warm welcome to all with a cup of Belfast Brew on arrival before they take a relaxed and informative stroll around the various studios, open from 11am to 5pm.

Additional information is available at www.belfastopenstudios.com