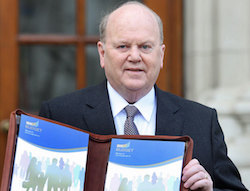 The Minister for Arts, Heritage, Regional, Rural and Gaeltacht Affairs, Heather Humphreys TD, on Tuesday announced increases in funding across a range of arts and heritage bodies under her Department’s remit for Budget 2017. The Minister has said that Budget 2017 will allow her Department to build on the positive legacy of the Ireland 2016 Centenary Programme, while also delivering for rural communities across the country.

Key points on the arts in Budget 2017 include:

“a major vote of confidence in it. It also recognises the important contribution that the arts make to the lives of people across Ireland. We particularly welcome the hard work and commitment demonstrated by Heather Humphreys, in securing this increase in funding for the arts in a very competitive budget process”.

In a press release issued from The National Campaign for the Arts, NCFA Chairperson Jo Mangan said –

“We recognise all the efforts made by Minister Humphreys to maximize the outcome for her department. While recognising the positive impact of the steps taken, we are disappointed that the outcome was not more positive for the sector. In our pre-Budget submission the NCFA stressed the need to work urgently toward restoring the €30 million stripped from the Arts Council funding since 2008 and the devastating cuts to the National Cultural Institutions. This would have provided some much needed stability for artists and arts organisations. There is strong disappointment coming from members who expected a significant increase from Budget 2017, in order to make extraordinary art happen for the citizens of Ireland. At 0.1% of GDP, Ireland’s expenditure on Arts and Culture is at the bottom of the list of EU countries compared with an average of 0.6%, surely something no country can condone. The NCFA calls on the Government to rethink their ongoing strategy for the arts and work actively with the arts community to raise arts funding to the EU average as a matter of urgency.”