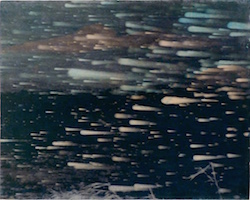 ‘Crystalline’, is a series of artworks relating to the dying glaciers. This installation brings the elements of contemporary engineering together with prehistory in the use of carbon and charred bone. The artwork is created to mark the launch of the Solar Orbiter into Space in 2018. Siobhan McDonald in collaboration with Enbio and the European Space Agency.

McDonald’s research and preparatory work includes collaborative work with the European Space Agency, an expedition to the Arctic Circle in 2015 and an ongoing studio residency in the College of Science at University College, Dublin.

In Crystalline, McDonald reflects on the creative processes and formative energies in nature contained within atmospheres, molecules, sounds and seeds. Positioning her work within geological history, McDonald explores our understanding of time and our relationship with a continually changing environment.

In the exhibition hall of the Centre Culturel Irlandais, (and later on at the European Space Agency in Amsterdam), Crystalline brings together a selection of works related to the substance of ancient and historic natural forms. Oil paintings are based on photographic plates found in the remains of several Arctic expeditions during the 19th century. A space and time outside was formed when the artist discovered a set of 190-year-old seeds that came from the Franklin Exhibition in 1825. She is now developing a work with the Millennium Seed Bank at Kew Gardens to explore the potential life force of the seeds. For the duration of the exhibition scientists will test the seeds as a live project. ‘Cyathea australis,’ investigates the early tools of photography reducing this medium to its bare essentials in a series of photogenic drawings that interrogate an era before the Anthropecene. The silhouettes of our earliest plants in this series are generated by a 400-million-year- old atmosphere.