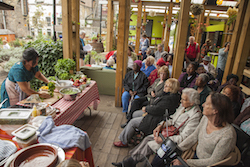 After careful consideration and rigorous debate, a winning team for Public Age has been selected. London-based design studio The Decorators (www.the-decorators.net) and Irish artist Joe Coveney (josephcoveney.com) have been chosen to lead a project exploring public space and older people in Dún Laoghaire-Rathdown in 2017.

Public Age is an open call commissioned by the dlr CoCo/HSE Arts and Health Partnership with additional grant aid from the Arts Council, in partnership with the Irish Architecture Foundation. Public Age will interrogate how public space is, can be and should be designed with older people in mind through a collaborative project and public outcome. The open call was met with great interest, with a range of multidisciplinary teams featuring architects, designers, artists, arts organisations, health practitioners, social scientists and community volunteers proposing exciting and creative ways of collaborating with older people in Dún Laoghaire-Rathdown and intervening in the County’s public spaces. But while it met stiff competition, the proposal by The Decorators and Joe Coveney to engage with older people through a series of communal dinners, radio broadcasts and celebratory events stood out as an innovative way to collaborate and consult with older people while increasing both their use of and visibility in public space.

Irish visual artist Joe Coveney has worked for the past 15 years on a range of exhibitions, workshops and community projects. The Decorators is a multidisciplinary design studio specialised in designing, producing and delivering community building interventions, founded by Irish landscape architect Suzanne O’Connell, psychologist Carolina Caicedo and architecture graduate and curator Mariana Pestana.

The team will meet with dlr Arts Office, the HSE and the IAF in January to begin planning their project, which will see a series of events occur in Dún Laoghaire-Rathdown in the spring and summer of next year.

*Image: Hackney Circle, a project led by the Decorators with Hackney Council to increase social and cultural use of public space in East London by older people