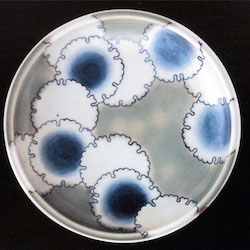 Join Craft NI & the Ulster Museum for an illuminating series of free talks on Japanese Pottery by Mike Robinson, former Head of Applied Arts at the Ulster Museum, Belfast and an expert in Irish contemporary glass & ceramics. Begins 8 March.

Beginnings
Wednesday, 8 March, 1pm
In this first talk we see the growth of a young society and the emergence of a culture from a hotch potch of foreign influences into a dynamic and highly individual identity.

Cha No Yu, Ceramics and the Tea Ceremony
Wednesday, 15 March, 1pm
Cha no Yu, the Tea Ceremony is one of those Chinese imports like Buddhism and like Chan Buddhism, became Zen Buddhism and very Japanese. Initially it was exclusively an aristocratic activity but once it was adopted by the Samurai class, from a monastic ritual it became a serious expression of the life of the warrior. Later it would become just as serious to the mercantile classes and Japan as a whole, and in all social classes, ceramic, was an essential expression of the way of tea. It was the tea ceremony that raised pottery to the status of art and the potter, one able to make a distinctive contribution to the expression of the national identity.

Porcelain
Wednesday, 22 March, 1pm
Japan discovered porcelain later than its neighbours but quickly made up for that, producing beautifully refined, bold and highly decorative wares. When Chinese porcelain production was severely interrupted by the collapse of the Ming Dynasty in the mid-17th century, just as the west was increasing its demands, Japan stepped in to fill the gap.

In Our Time
Tuesday, 28 March, 1pm
The 20th century has seen more dramatic and wide reaching change than any previous, as much in Japan as anywhere else. This is as true in ceramics as any other area of life and the arts. Potters are still artists, but now they are also sculptors, without replacing or overriding the makers of the domestic. In 1996 a young Japanese ceramic sculptor, Yashuko Sakurai won the prestigious Fletcher prize in New Zealand and a large cash prize, accepting it with gratitude she stated that it would allow her to concentrate on producing a line of plates she wanted to make.

Today the Japanese potter is as able to express the spirit of his, her time, nation, self as successfully an artist working in any other field of the arts. And they do.