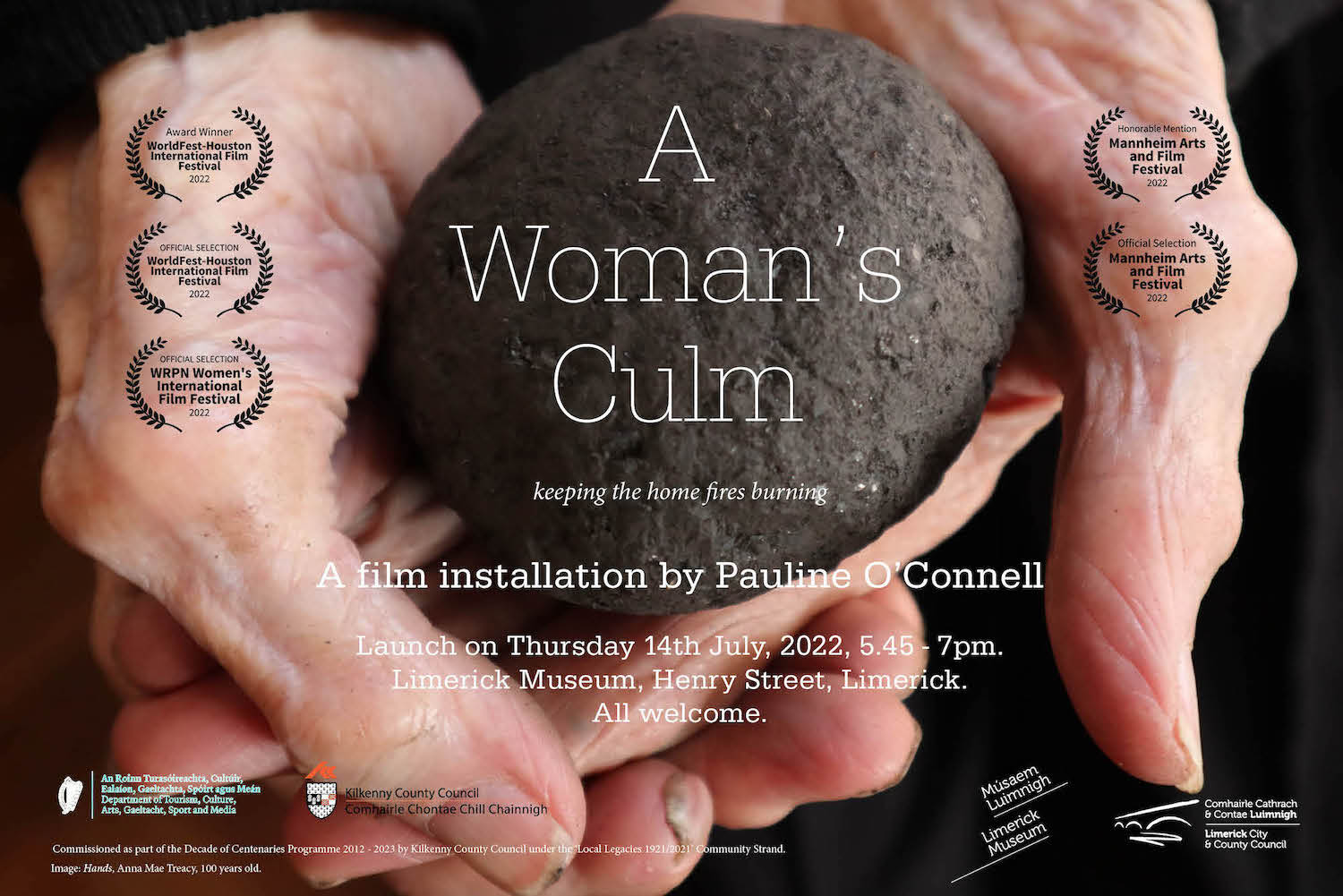 ‘A Woman’s Culm’ (2021) HDV 17:30 mins by Pauline O’Connell is a single-channel film, an artistic response to the commission call-out under the ‘Local Legacies 1921/2021’ Community Strand of the Decade of Centenaries Programme in County Kilkenny.  The short cine-poem, centred on the upland areas along the Castlecomer Plateaux, makes visible rural women’s day-to-day struggles that resonate with Ireland’s War of Independence era.   By ‘keeping the home fires burning’ women not only maintained the home and family but also provided support to the 600+ men of the Castlecomer Battalion. Their tasks included administering first aid; message-carrying; weapons carrying; secrecy and providing safe houses to those on the run, and keeping equilibrium in the face of the unknown.

The cultural practice of ‘culm’ making – unique to coal mining areas – meant that women’s hands became fighting tools and the raw materials that made up ‘buns’, ‘bungs’, ‘bumbs’, or ‘culm bombs’ – a mixture of coal dust, yellow clay and water – formed by the women’s hands became a measure of their labour.  Believing these female personal narratives – where generational learning and grounded knowledge are universally contemporary, this material object (similar in shape and size to a Mills bomb) embeds resilience, self-sustainability and commemoration alike.  And while the short film occupies a borderland where past realities are remembered in the present and historical re-creating mingle, the collaborative processes and social engagements as a result of making the film have created new intra-rural connections and collaborations that, not only speak to the past but to the future too.  As we become more aware of the global climate crisis this material object comes into focus once again as the world attempts to transition from fossil fuel to green energy – the human/nature struggle continues.  This is at once personal, national and global in scale.

For this, O’Connell’s first museum solo exhibition in Ireland she will screen the film, which is looped, alongside exhibiting sculptural work.

Biography Dr Sinéad McCoole created A Pop-Up Women’s Museum – 100 years of Women in Politics and Public Life on behalf of the Department of Culture, Heritage, Gaeltacht, Sports and Media. Specially adapted versions toured every Irish province in 2019 and 2020. The exhibition is now in the 17th-century landmark building, The Main Guard, Clonmel, County Tipperary. A member of the Expert Advisory Group on the Government of Ireland Decade of Centenaries Programme since 2012 and an Ex-Officio member of Vótáil100. Currently, she curated the Mna100.ie website. This is an online resource for podcasts, films, webinars, seminars and articles relating to the role of women, part of the Irish Government’s Decade of Centenaries Programme. She is the author of several books on Modern Irish history focusing on the role of Irish women. In 2019 she was awarded her D Litt (National University of Ireland).