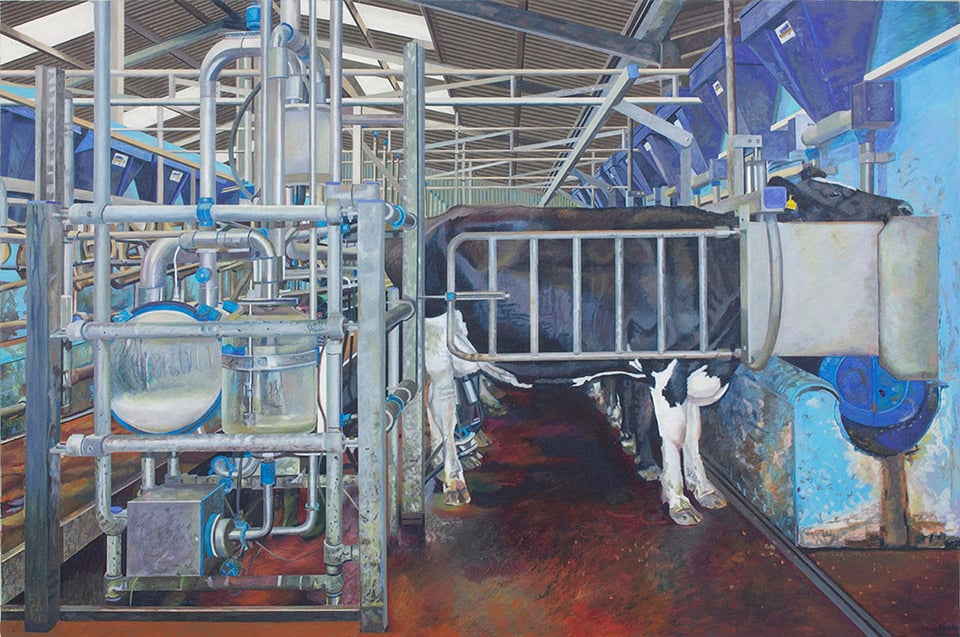 “Few artists have managed to capture the timeless integrity and fraught complexity of agriculture at this transitional time. Artist, Mary Burke’s work in At Home on the Farm will remain an eloquent testament to farming in Ireland at a seminal point in its 6,000 year existence” Manchán Magan

In this first exhibition of the new year at Limerick City Gallery of Art (LCGA) ,  Mary Burke’s paintings of her experience on five Limerick farms take centre stage in an exhibition of work called At Home On The Farm.  For four decades, Mary Burke has captured suburban Dublin scenes in oil pastels in a style that honours the quiet, still, suburban sanctuary spaces of Irish homes and housing estates.    These new works at LCGA called At Home on the Farm represent a bold new departure: after 40 years of diligently documenting the urban and suburban, Burke has made a radical shift in direction.

In part the shift to the agricultural was prompted by a project which she undertook in Stradbally, Co Laois in 2015 with her gaze drifting to the surrounding landscape.  When LCGA invited her to work in the county, she found herself out in the farmyards where nature got a hold of her. The result is At Home on the Farm.  Her engagement with the individual farm families made an impact on Mary Burke and she speaks with genuine passion of them all.

“Take for example John Macnamara and  the quality of his grassland,” she says. “Or, the wonderful treasure trove of curiosities that Morgan Murphy has amassed in his barns and outbuildings. It was impossible for me not to document and celebrate these things.”  She talks with equal enthusiasm about all the farms she visited; from Dan Browne’s majestic barn and traditional farm buildings in Thomastown, to June Danaher’s fine pedigree Limousine suckler calves in Shanagolden and David Ryan’s timeless lakeside farm at Lough Gur abutting a 15th century castle.

The exhibition depicts the facets of each farm that were most important to the individual farmers or that made a particular visual impact on her, such as Macnamara’s cattle, milking parlour and grass pasture, which exemplify the core priorities of his working life.  “In truth, I just wanted to capture the essence of their farms,” she says. “There’s been a tendency in the past to romanticise the Irish landscape. I wanted to avoid that. These are working farms that are functional and lived-in. I wanted to convey a sense of the industrial farm infrastructure against the natural landscape.”

Burke’s work enabled her ‘to escape my bubble and to see how others live their lives – to document the truth of their existence. It brought home to me the sheer variety of life on this island. It’s something I’m eager to engage more with in future work.”