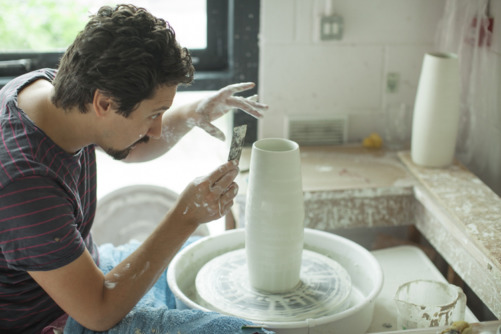 Craft NI has commissioned four films of contemporary Northern Ireland makers at work in their studios.

Derek Wilson
Ceramicist Derek Wilson starts the series from his studio in Belfast. Derek Wilson lives and works in Northern Ireland and studied as an undergraduate and postgrad at Belfast School of Art. He now exhibits and sells widely in Europe and Japan – and fortunately in NI and Ireland too!

The studio films aim to give an insight into the inspiration, values and processes behind the work of all the makers.

Cara Murphy
In the second of our Studio Interviews, meet Cara Murphy, silversmith in her Co. Down workshop.

Cara Murphy trained at Glasgow School of Art and the Royal College of Art, London and since the early 1990’s she has run her own practice in Northern Ireland creating silverware for both private and public commission. Her silver tableware is represented in many national and international public and private collections including: The Silver Trust Collection at Downing Street; the Arts Council of Northern Ireland; the Ulster Museum; the National Museum of Ireland; the Irish Embassy Collection and the Royal College of Art, London. She was commissioned to make the trophy for the Grand National winner in April 2020.

Cara works mainly to commission and her award winning silver tableware has been showcased in numerous high profile applied art and silversmithing exhibitions. She lives and works in Northern Ireland and alongside her practice she teaches at Ulster University.

She is a Freeman of the Worshipful Company of Goldsmiths and has her work represented and promoted by the Crafts Council of Ireland’s Irish Craft Portfolio: Critical Selection. She is a selected member of the Contemporary British Silversmiths and of Who’s Who in Gold and Silver. Cara’s work is represented by Adrian Sassoon Gallery in London.

Adam Frew
Living and working in the beautiful countryside of north Antrim, Adam Frew is a potter working in porcelain creating a popular range of functional ware and large one-off pots.

He studied at Belfast Art College but spent time at the historic Winchcombe Pottery learning about production pottery, and after a two year apprenticeship with Lisa Hammond at her Greenwich based pottery he established his own practice in Northern Ireland. Based at Flowerfield Arts Centre for 12 years he then moved his practice and family to Aghadowey in Co.Derry, and, partly financed by a crowd-funding campaign, he turned an old barn into a purpose-built studio from where he now works and teaches. His online shop sells out quickly though!

Scott Benefield and Andrea Spencer
Scott and Andrea met during a residency at North Lands Creative Glass in Lybster, Scotland in March 2004 and were married in Ballynahinch, Northern Ireland in June 2010.

Benefield Spencer Glass (formerly BTU studio) was established in Randalstown and found a new home on an old farm property near the north Antrim coast just outside of the village of Ballintoy in 2016. It is a full-featured studio for doing all sorts of work with glass, including glassblowing and flameworking facilities, as well as various fusing and slumping kilns, sandblasting and extensive equipment for grinding and polishing glass.

Individually and collectively, they product an annual line of functional handblown glass that is marketed throughout the UK and Ireland and execute commissioned work that varies from public art to architectural treatments, bespoke lighting to props for television and film productions. The common denominator is always their passion for the highest quality of artisanal glass.