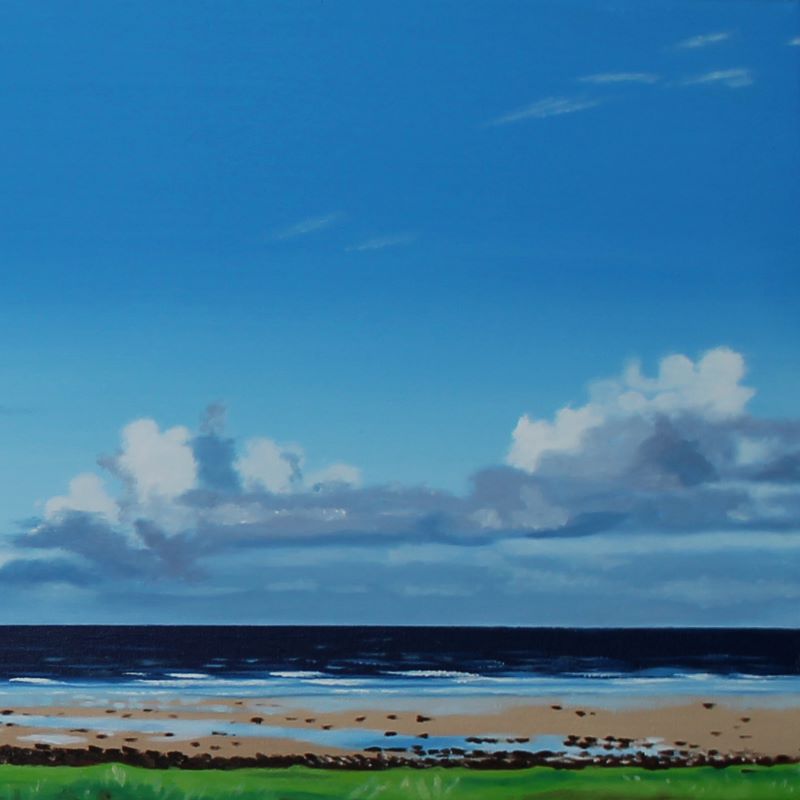 Originally from Co Mayo, Visual Artist Brenda Flannery lived in Galway for ten years,and graduated from the Centre of Creative Arts & Media in 2015 with a BA Honours Degree in Fine Art. She attended the SIM Residency in Reykjavik, Iceland in 2017 and has participated in numerous group exhibitions including the RUA Annual Exhibition in Belfast. In 2020 she moved to Geesala, Co Mayowhere she now lives and works at her practice full-time.

‘Ephemeral’ is an exhibition of oil paintings inspired by thesurrounding rural landscape and miles of sandy beaches along the West Coast of Erris.Research in the form of sketches, photographs and videos of changing weather, varying times of day and high tidesare gatheredand used as starting points for the work.Small studies are created on aluminium panels using acrylics and oil paint and larger paintings begin to emerge from the process on board and stretched canvas. The work is built up in layers of oil paint to create the same sense of depth, light, and spaciousness encountered in the landscape.The application and blending of the layersis a sourceof meditative experience found in the process of painting.

All the images are of vast, remote locations. The remoteness and solitude of the images are a direct reflection of the solitude that can be found in such remoteness.Some images are still, serene, simplified views that offer the senses a rest from the overstimulation of the outside world while others portraymovement and energy. Capturing the elusive quality of light is at the core of the work and the magical, fleeting essence of light is seized so that we can contemplate the beauty and intensity of these transient moments a little longer before the temporality of the setting subsides and disappears to time.

Brenda Flannery’s practice initially evolved by examining the concept of time-consciousness. The exhibition is a reflection on how our own time can be altered by movements beyond our own humanity. The work emerged from a time of solitude due to a relocation during the pandemic and in her choice of imagery she invites us to find the same solitude in such remoteness and temporality as she herself has done.