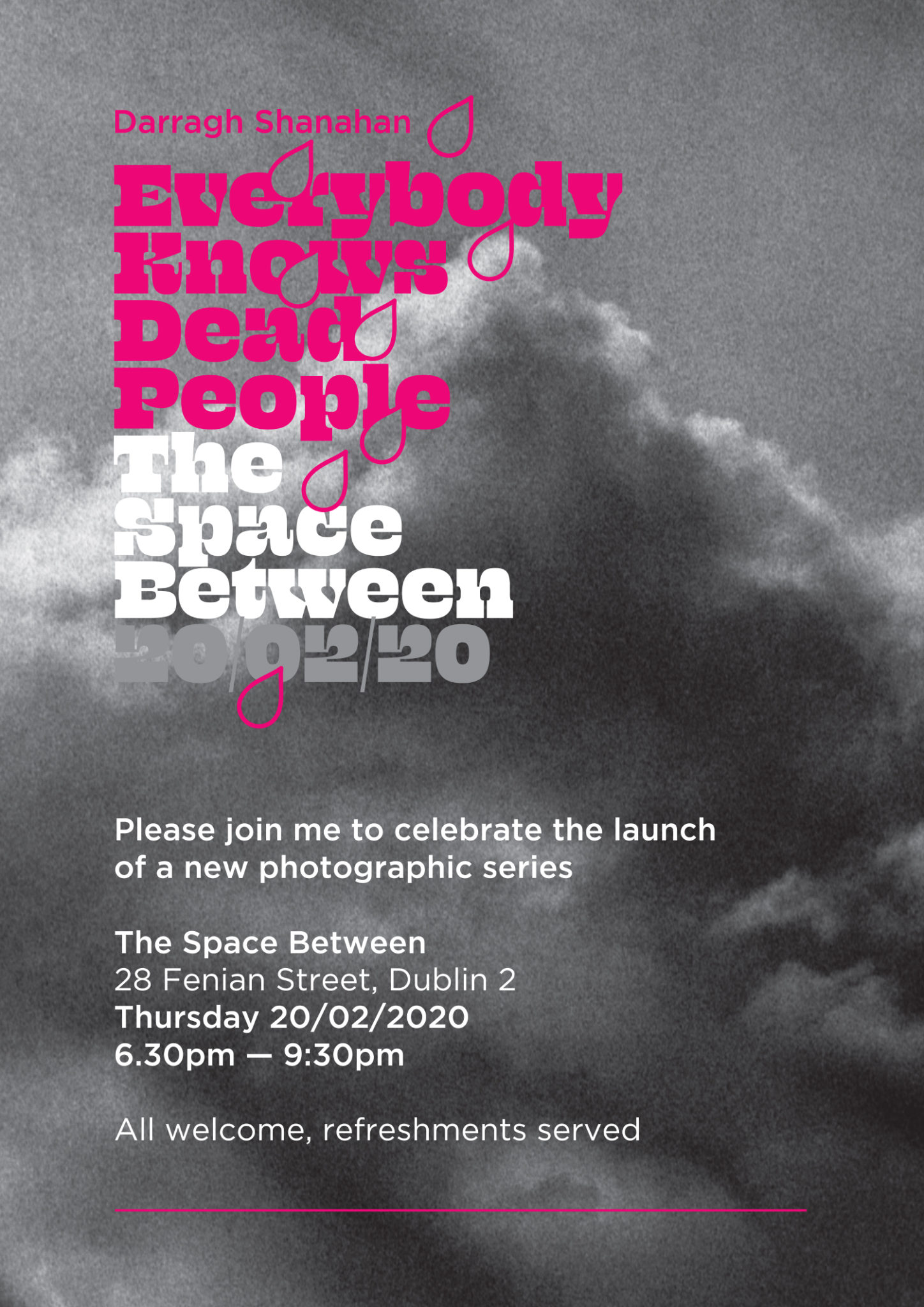 The Same Sky by Darren Campion

It might well seem that photographers are as fond of clouds as the Romantic poets appear to have been; a not very comprehensive list finds Alfred Stieglitz, Nobuyoshi Araki, Paul Graham and even William Eggleston turning their cameras skyward, to seek the ethereal – or something like it. Good company, then, though in truth such comparisons tell us very little. After all, no one has photographed these particular clouds before, and even though photography has a rich history that artists can build on or discard as they wish, the photograph itself is always a singular, unrepeatable encounter – you
can’t photograph (or indeed, even look at) the same sky twice. But then again it is also, in a very real sense, always the same sky that every single person on the planet shares at any given moment, perhaps light here and dark there, always changing and yet – always the same. It is this paradox that lies at the heart of Darragh Shanahan’s series Everybody Knows Dead People

These push-and-pull dynamics are repeated throughout the work, indicating one state, while returning to its apparent opposite – and without attempting to reconcile the difference between them. The heightened awareness of what is happening over-head actually reinforces the sense of our immediate, grounded position. It is a movement that grows out of a seemingly trivial observation, activated by simply shifting our attention upwards, and each picture is a token of this subjective awareness. But the work is sufficiently open to draw the viewer into that position as well; we are able to share the impression of someone being here, seeing that. Taken together, then, these ‘portraits’ articulate the experience of the spectator as resolutely earthbound, both in the literal sense of course, but also, and perhaps more importantly, in the frustrated realisation that human understanding is finite; the heights we so often desire are beyond our grasp, and this understanding is inevitably matched to the sense that our natures – whatever those might ultimately be – pull us irresistibly toward an earthly, all too human destructiveness.

Correspondingly, a longing for the sublime, for something greater than ourselves, is almost inescapably cultural precisely because it traces anxieties about what a culture cannot provide. Facing those limitations, it becomes the task of art to imagine what lies beyond them. This is not an act of consolation, but rather of facing often-uncomfortable realities – while inventing a suitable language for them. By implicating us so specifically in his up-ward gaze, that
is just what Shanahan’s pictures do. If it is all the same sky, then that consistent presence – at least as it is seen here – acts as a reminder of our own impermanence, the certainty that the world as it is will endure our specific absence and continue largely unchanged, except perhaps in some infinitesimal way. But it is the sum of those small changes, added together, that is the whole of human history, very short indeed when compared to the amount of time that the sky has been facing the earth. We are just positioned awkwardly – and briefly – in between.