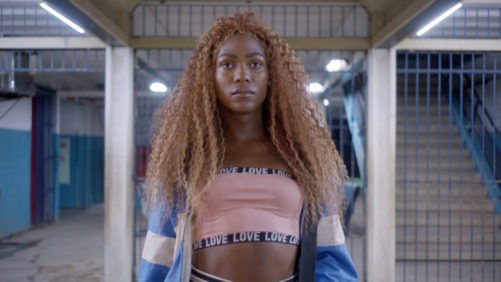 Temple Bar Gallery + Studios is delighted to share an excerpt of Swinguerra by Bárbara Wagner & Benjamin de Burca, on the occasion of its original planned opening date, 7 May.

TBG+S are rescheduling this exhibition to open in August, and look forward to sharing confirmed details of these plans with you soon.

Bárbara Wagner & Benjamin de Burca’s films focus on music and dance forms that draw under-represented communities together, highlighting visibility, legal rights and self-representation. The resulting films are a hybrid of music documentary and socio-political study that deftly communicate complex issues with a broad-reaching and upbeat attitude. Wagner & de Burca conduct in-depth primary research in specific social contexts, building relationships with individuals who actively elaborate their own roles in their film-scripts, resulting in a vibrant and inclusive collaborative film-making practice.

Wagner & de Burca represented Brazil at the Venice Biennale 2019, with Swinguerra, a film that documents an expressive contemporary dance phenomenon performed mainly by transgender and non-binary dancers. In the context of changing social and political conditions in Brazil, swingueira is an artform that calls for liberation and participation.

Bárbara Wagner & Benjamin de Burca have had solo shows in museums and galleries around the world, including Stedelijk, Amsterdam (2019), Art Gallery of York University, Toronto, Museo Jumex, Mexico City; and participated in major group exhibitions such as Venice Biennale (2019); Skulptur Projekte, Münster (2017); and São Paulo Bienal (2016). They have also been included in the Berlin International Film Festival (2019, 2018, 2017); Locarno Film Festival (2019); and Tel Aviv International Documentary Film Festival (2017). Their work is part of the permanent collection of the Kadist Art Foundation, France; The Arts Council Collection, Ireland; Pérez Art Museum, USA; among others.