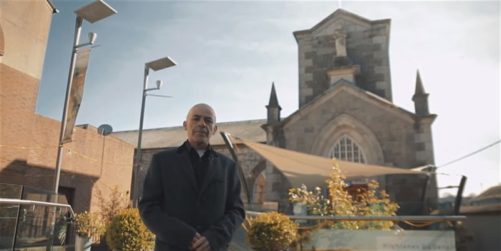 From their medieval foundations on the banks of the Boyne in the year 1240 to the beginning of a new millennium in the year 2000, the Franciscan Order had become part of the historical fabric of Drogheda for 760 years.

Often having to move around, and sometimes in secret, in order to practice their religion and administer the faith in the aftermath of the dissolution of the monasteries, the Franciscans, however, never moved far from their initial foundations at the River Boyne and eventually a new friary was established in the vicinity of Kezer’s Lane and Laurence Street.
It is now twenty years since the final mass was concelebrated at the friary chapel by Fr. Ulic Troy O.F.M. at the close of July in the year 2000 and, subsequently, in 2002 it was announced that the former friary was to become an art gallery and would become Highlanes Gallery.

Community Historian, Brendan Matthews presents this guided tour & history of the Franciscan Order at Drogheda. Beginning at the gallery, Brendan outlines the closing of the former friary in 2000 and the subsequent establishment of Highlanes Gallery, moving through the magnificent Georgian streetscape of Laurence Street and down to the Mall overlooking the river Boyne and the first site of the Franciscan Order.

The tour takes in Mayoralty Street, Bessexwell Lane, Blind-Gate and the Bachelors Lane area, where the Franciscans secretly administered the faith during the days of the Penal law, before returning to the former friary and Franciscan chapel, now Highlanes Gallery, where the tour comes to a close, exploring this early 19th century religious house and the significant role played in its construction by a Drogheda-born member of the Franciscan Order.

Book in here to this special Eventbrite page so you can receive the link: eventbrite.ie/…/from-the-franciscans-to-highlanes-gallery…