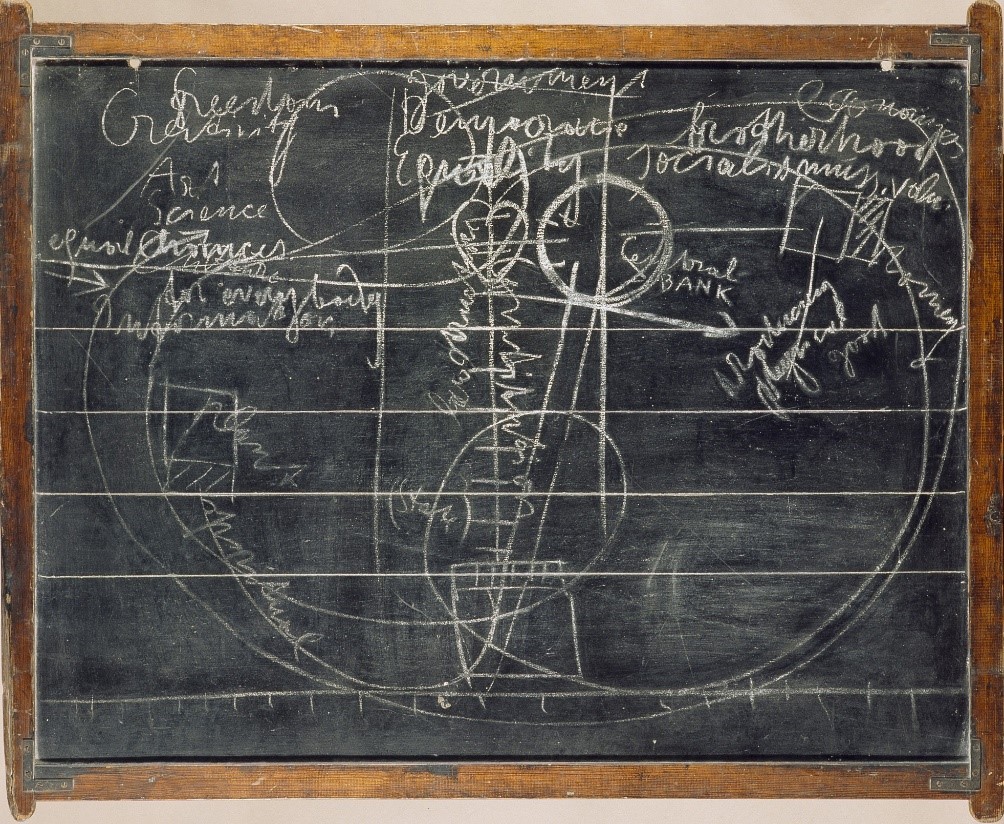 Hugh Lane Gallery is delighted to celebrate the centenary of the birth of the controversial and highly influential German artist Joseph Beuys (1921-1986) with the exhibition From a Secret Block to ROSC in the gallery and Fall Freely by street artist Asbestos on O’Connell Street.

In 1974, the Hugh Lane Gallery organised the first ever museum exhibition of Beuys’s work in Ireland The Secret Block for a Secret Person in Ireland.

Beuys had a particular interest in the Celtic world and in Irish mythology, literature and landscapes seeing them as significant sources for global cultural renewal and healing.

During the exhibition on the 15th October 1974, Beuys gave one of his famous, exciting if somewhat bewildering lectures illustrated with drawings on three school blackboards. The gallery acquired these blackboards and they are the centre of From Secret Block to ROSC.

From Secret Block to ROSC will also include archive material which further reveals Beuys’ relationship with Ireland and photographs by Caroline Tisdall which document Beuys’ famous visit.

A temporary mural will be created by street artist Asbestos on O’Connell Street, inspired by the works of Joseph Beuys in the Hugh Lane Gallery and their exhibition From Secret Block to ROSC opening 14th July 2021

This mural inspired by Beuys philosophy and understanding of the role of art in society is accompanied by a quote from Beuys: “Pass freely from one level of existence to another” . It references Beuys’ deep interest in Irish mythology and how it address the transition of the soul from the natural world

The temporary mural shows a figure made up of thousands of individually drawn burnt matches. Each match represents the life of a person who has died in Ireland during the Covid pandemic. Each match extinguished at a different stage in its existence.

The temporary mural, comprising almost 5,000 matches will be painted over 10 days from 19th June, on a large gable wall at the top of O’Connell Street. Each match represents an individual who has sadly passed away from the pandemic, a life cut short, along with their hopes, ambitions and the memories that they would have created for their family and friends.