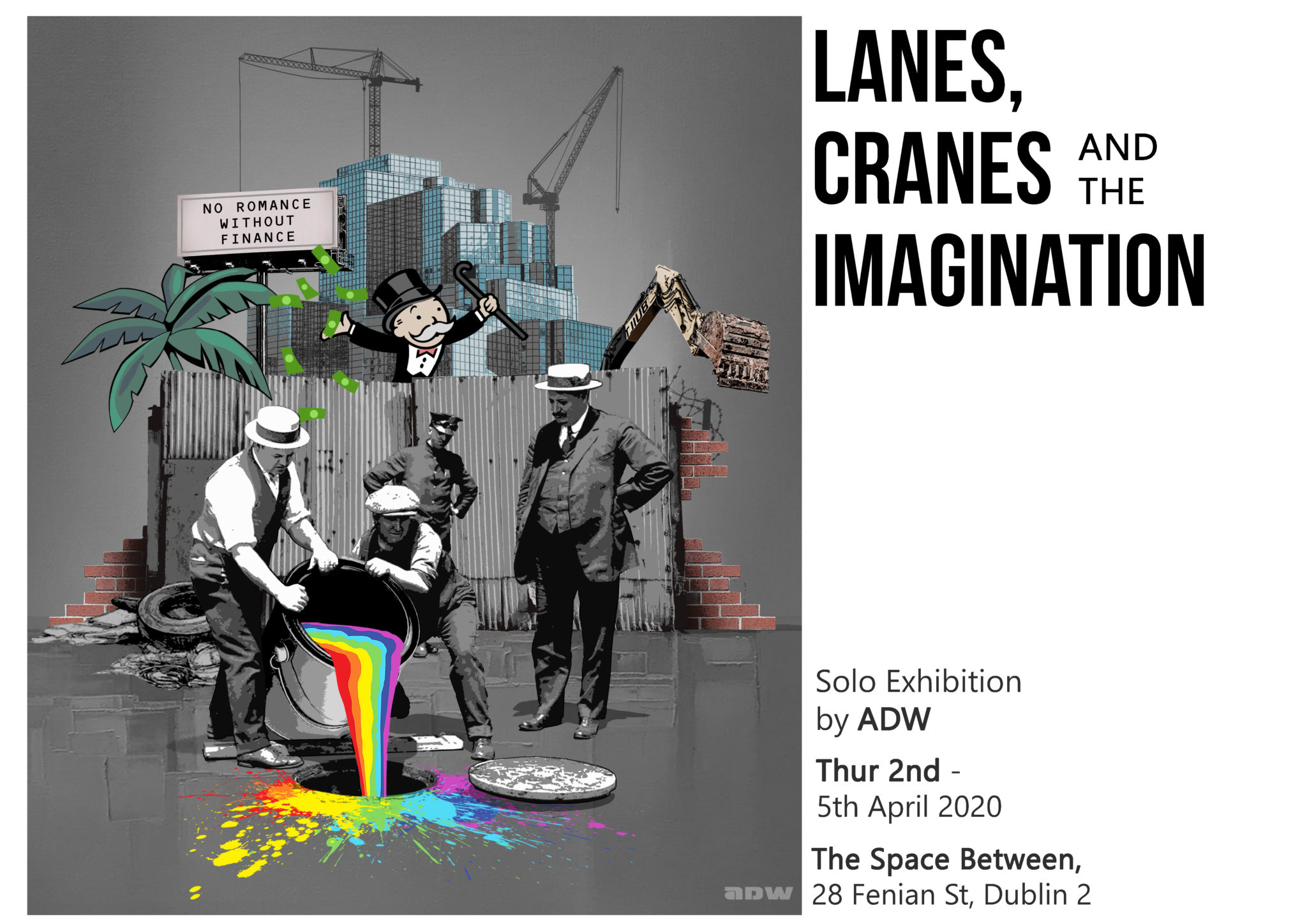 Map Unavailable
LANES, CRANES AND THE IMAGINATION – An exhibition that explores the complex relationship and challenges between our creativity, individuality and expression in modern society.

Proudly supported by OFFSET and part of the OFFSITE 2020 festival.
A MAJOR NEW SOLO EXHIBITION FROM ONE OF IRELAND’S MOST ESTABLISHED STREET AND URBAN ARTISTS.ADW is proud to present ‘LANES, CRANES AND THE IMAGINATION’, a solo exhibition of new artworks from one of Ireland‘s most established urban and street artists, launching this April, in THE SPACE BETWEEN, Dublin. The exhibition, representing hundreds of hours of meticulous work and fine detail includes original artworks, assemblages and screen-prints by ADW. Please join us for the opening reception on April 2nd 2020, at the Space Between, 28 Fenian St, Dublin 2, from 6-9 pm, proudly supported by OFFSET.

This exhibition sees an engaging and exciting mix of new work from one of Ireland’s boldest street and urban artists who has continually pushed the boundaries of his craft to new levels. An exhibition that explores the complex relationship and challenges between our creativity, individuality and expression in modern society. ADW combines all that he knows from his street-art and digital design background to create engaging works of art that depict his perspective of the world around him. The end result is an exhibition of layered narratives that questions and challenges the boundaries  between traditional and contemporary visual art.

Art has been central to ADW’s life ever since he started dabbling with his creativity while still in primary school. After ﬁve years studying animation in Ballyfermot college, Dublin, he moved to Britain to work in the computer games industry. In 2005 he returned to a booming Ireland. Slowly becoming more and more disillusioned with a future in the computer graphics world and dreaming of a more creative future. However, his mind was made up for him in the fallout from the economic crash of 2008, when he was made redundant from his full-time job as a 3D artist. He returned to his creative roots and began to produce his own art full-time. A determined creative and social activist, the economic collapse provided the backdrop for much of his art and street-art, earning him much acclaim and recognition in the process. His art attempts to reflect the everyday hopes and fears of the ordinary people. Laced with satire and burnt by honesty, his pieces are often imbued with a dash of acerbic humour.
Share:
FacebookTwitterLinkedInTumblrEmail