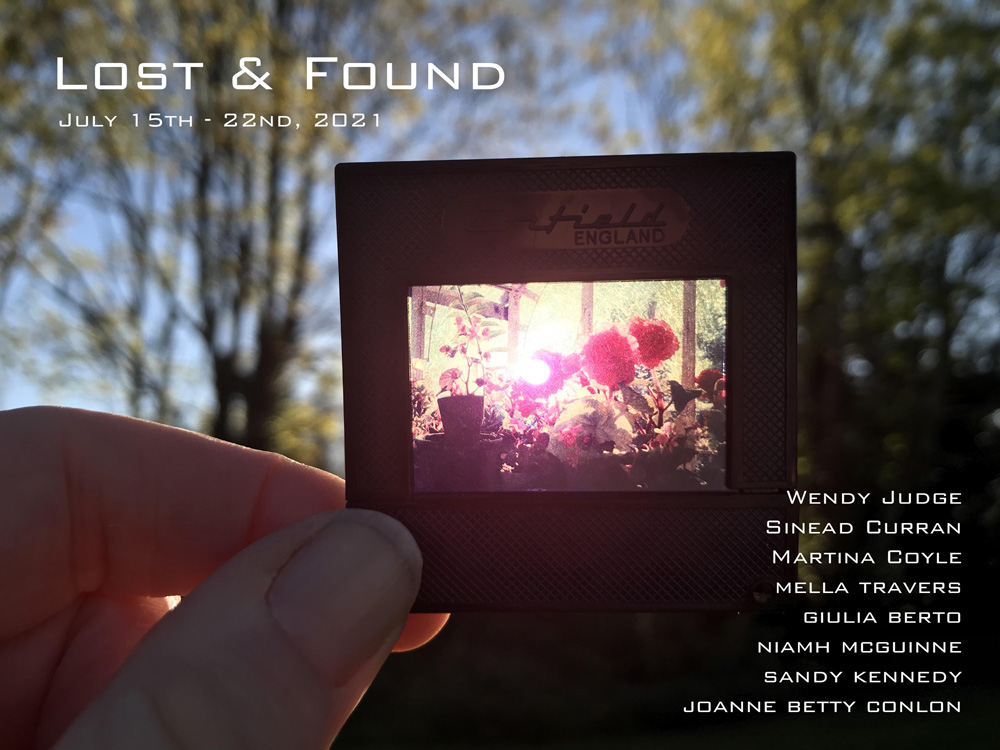 These slides were discovered in a box which was donated to the Darkroom a long time ago, curiosity rose but then diminished when someone wanted my attention. I put them on a shelf and walked away; they were lost again.

During the Covid times all was quiet, streets deserted and The Darkroom was silent. No chatting, no sounds, no movements. It was time to tidy up and get some order, this was when the slides were found again.

After re-finding them, I put them in an obvious place that would catch my eye, when all was quiet, I took a gander at them and felt inspired by the idea of Lost and Found. With all that has been going on in our community, there has been a sense of Loss and also a sense of found, new ways of being.

These events inspired this exhibition.

I am fortunate to be surrounded by a group of multidisciplinary women artists who have come together for this project. The only rules are that they have to pick one slide each blindly and cannot change it. They can do whatever they want with it. Burn it, play with it, draw on it, use it. Anything is allowed. All under the umbrella of Lost & Found.

Wendy Judge is a visual artist  based in Dublin. In 2020 she was awarded a travel residency with the darkroom.ie followed by an exhibition in 2021.

Exhibitions  include  The Lump Show at Cornelius Projects, Los Angeles USA 2019, Factory Installed at the Mattress Factory, Pittsburgh, USA 2016.  In 2013 she was invited to make new work alongside William Evans of Eton (1798-1877) in From Galway to Leenane: Perspectives On Landscape, National Gallery of Ireland.

She has been part of Difference Engine a model of autonomous and evolving artist curation since 2009, most recently showing at HDLU in Zagreb and Resort Revelations Fingal Arts Program, Dublin, in 2018. Solo projects include Souvenir Views at Pallas Projects, 2012, Great Works at Goethe-Institut Dublin, 2008 followed by Works of the World United, Thisisnotashop, Dublin in 2009. Group exhibitions, include The Balloon at Rawson Projects, New York, 2014, Dublin Contemporary, 2011 and ‘Last’ at Douglas Hyde Gallery, 2012, She was one of a group of artists that represented Thisisnotashop, at the Festival of Independents – No Soul for Sale, New York, 2009, and at Tate Modern, London, 2010.

Wendy Judge: Collected Views of Great Works from the 20th century was published in 2008 as part of work centred around no go places. She has been supported by Arts Council of Ireland, Culture Ireland and received A Thomas Dammann Junior Memorial Award in 2019.

Sinead Curran is an artist based in Dublin. Her work examines the complex relationship of individuals to place, employing a visual lens in the context of the ways we live today devising approaches to site-specific response.

Martina Coyle is a Westmeath-based multi-disciplinary artist whose practice is made up of three inter-related strands; studio-based artwork/ installation, public artwork and art facilitation. Martina has exhibited extensively in Ireland and France, where she lived for many years. Her work utilises diverse mediums and modes of fabrication including photography, drawing, video, sculpture, installation, sound and light. Her many commissioned public artworks, from permanent to ephemeral, include collaborative and residential public projects in various locations around Ireland. Martina’s recent body of work deals with our relationship to our environment, the control of wildlife and the universal instinct to seek shelter.  Currently she is exploring the transformative aspect of light, the consideration of the nature of substances and how we engage with the built and natural world.

She graduated in Glass Design from NCAD in 1990 and MA in Art and Research Collaboration from IADT in 2019.

Mella Maude Travers is a conceptual artist working in the medium of analogue photography and motion film. My approach is experimental and multi-faceted using emulsion manipulation and chemical processing to address issues surrounding the embodiment of trauma and the relationship between first-hand experience and out-of-body observation. Beginning with the conventional portrait format I incorporate a combination of negative and positive processing techniques to suggest this ethereal/liminal space where the subject exists with one foot in and one out of the present moment. I am interested by how the person and their body is shaped by their experiences. I shoot in studio & on location to produce narrative and non-narrative sequences which hint at how the body responds to being observed and at the specific point where the body becomes still, present and empowered. Mella works in Analogue photography using large format cameras and motion film.

Giulia Berto is an Italian photographic artist. Her work draws from the personal, creating atmospheric imagery and meditative scenes evocative of her own feelings. Working predominantly with the medium of analogue photography, she engages with themes of love and intimacy, home, emotional displacement and identity.

She has lived in London, Berlin and New York, where she studied under Guggenheim Fellows Greg Miller and Andrea Modica. Her work has won various awards and regularly features in publications such as B+W Photography, Phototrend and HuffingtonPost. Her photographs are routinely exhibited worldwide including Circulation(s) Festival (Paris, 2018), The Print Swap (Athens, 2021) and premiered in Ireland in a solo show at The Darkroom (Dublin, 2019).

She graduated from the International Center of Photography in New York and holds an MSc in Evolution of Animal and Human Behaviour as well as a BSc in Biology. She lives by the River Liffey in Dublin.

Extimacy as an outer expression of the most inner state is a theme that underlies my current work.  Marvelling at how the body absorbs and holds psychological and physical experiences as a memory in the form of biological armouring, I draw a parallel to the protective nature of the shell, sometimes using the silhouette to emphasise this interior space.  My practice can be broadly described as expanded print, incorporating sculptural elements, film and installation. I also make structures, inhabitable or often wearable, whose function is not initially clear. They have echoes of minimalism in their materiality and industrial form but are post minimalist in their handmade assembly. They contain a myriad of possibilities with their indistinct appearance; a refuge from the unknown and invisible overload of the everyday world, where we are bombarded with signs, signals and information.

Sandy Kennedy is an Irish artist. She looks at communicating human fragility to others through sensory experiences and perceptions and develops poetic, open ended works, where a sense of self unfolds in shifting gestures using moving images, text and augmented sound.

Allegory was selected for Utopia/Dystopia at the dlr Lexicon Gallery 2019 and was part of Barcelona Loop festival in 2018. In 2020 One For Sorrow, from the Municipal Collection of Kildare County Council, was selected for exhibition with nine other women artists, supported by Creative Ireland and the Arts Council. Most recently she was awarded a Short Grass Film Award from Kildare County Council, and Professional Development and Film Bursary Awards from the Arts Council.

Joanne Betty Conlon is a Dublin based multifaceted visual artist. She works primarily with photography and often incorporates it with other mediums such as drawing, prints and collage. She is passionate about gathering and documenting, and her work often deals with the past. She often transforms images giving them a new form of existence. Holding onto their memories while creating new ones.

Betty studied printmaking and photography at Limerick School of Art & Design. Her work has exhibited at the RHA and RUA annual exhibitions and several other galleries. Her Office Reflections series was selected for Format International Photography Festival and published in Square Magazine.

Photographs she took of Limerick have been published in Winter Papers arts anthology with accompanying essays by the writer Kevin Barry in response to these images.

She and her husband run Pixelated.ie a design studio in Cabra, Dublin. She also works for Mazars as a graphic designer.