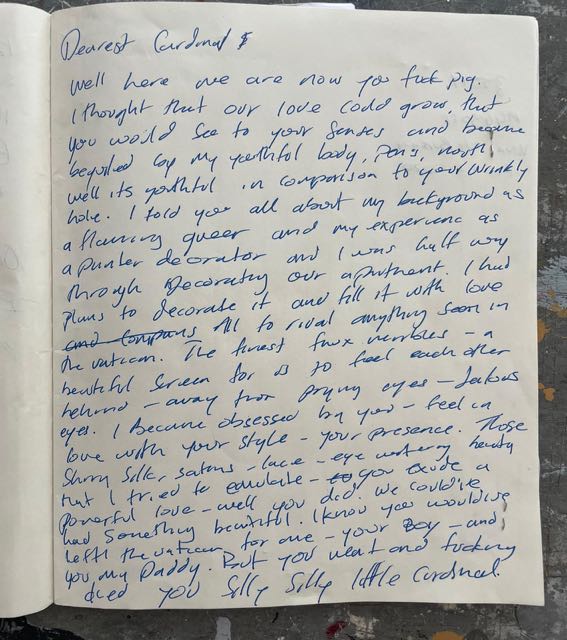 To whom it concerns,

Periphery Space invites artist Austin Hearne to do what he wills, dreams, desires over the course of a three-week installation in the gallery.

We wish the artist equal amounts of pleasure and struggle during this permissive contract.

Yours Faithfully,
the Facilitators,
Periphery Space.

Austin Hearne in conversation with James Merrigan on the occasion of his exhibition “Love Letters to Cardinal Raymo” at Periphery Space (Gorey School of Art). CLick for zoom link: periphery.space/

Austin Hearne is an Irish artist living in Dublin. He holds an MFA from NCAD. In April 2018 his solo show Remains at Pallas Projects/Studios was awarded as part of their Artist-Initiated Projects. In December 2018 he was awarded a place in the prestigious annual Periodical Review #8 also in Pallas Projects/Studios. In 2019, two works were acquired by the State Collection (O.P.W.), and these works are part of an Ireland wide touring exhibition Life in Still Life. Austin is part of the artist Collective Child Naming Ceremony who performed Host at TBG+S. He was also involved in co-curating an exhibition and publication Orphan with Curator and Artist James Merrigan. Four works where included in the 2019 survey show Silver at The Kevin Kavanagh Gallery’s 25th anniversary exhibition. In 2020 Austin was awarded the Arts Council Bursary. He exhibited his zine Dead at the Dublin Art Book Fair in TBG+S, also work was shown in Covid Stories Ireland at Lismore Castle Arts in Waterford. He exhibited in The Complex, Dublin with Ann Ensor in a show titled Ceremony. In 2020 he also worked with Artist and Curator Brendan Fox on the online platform, Games for Artists and Non-Artists (GFANA) with the archive of this project shown as part of A Reluctant Mirage in NCAD Gallery. In 2021 he collaborated on a music project Satin Shadow with film maker and music producer Glenn McQuaid, with a live stream performance in The Complex as part of Tanad Aaron and Mark Swords exhibition Portico. His film work Whispers was recently shown on RTÉ Culture (online) with an essay about the work in VAN. Austin has an upcoming solo show The Complex in November. Child Naming Ceremony will perform in the Circe Pavilion in Gorey in July. He has group shows in the The Luan Gallery in Athlone, Ballina Arts Centre, Garter Lane Arts Centre and Catalyst Arts, Belfast.