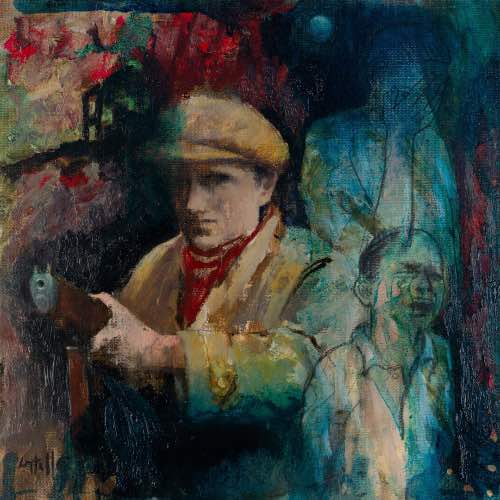 ‘Meditations in Time of Civil War’ with work from 125 artists, is Hamilton Gallery’s seventh invited artists exhibition which thematically draws upon a major poem by W B Yeats and set against the backdrop of Irelands Decade of Commemoration.  The exhibition takes place in association with Yeats Day 2021 and the Tread Softly….. festival.

‘Meditations in Time of Civil War’ by W B Yeats is a considerable poem which is written over seven sections. It is replete with powerful and compelling imagery and insights on a tumultuous period for Ireland as the country was going through its formative and often violent birth. This poem was actually written by Yeats in 1921. Although the Civil War in Ireland occurred in 1922 the Anglo-Irish war which frames the backdrop to this poem, was commonly termed and considered a civil war within Ireland at the time it was taking place.

Image: ‘Last night they trundled down the road, That dead young soldier..’ by Malachy Costello