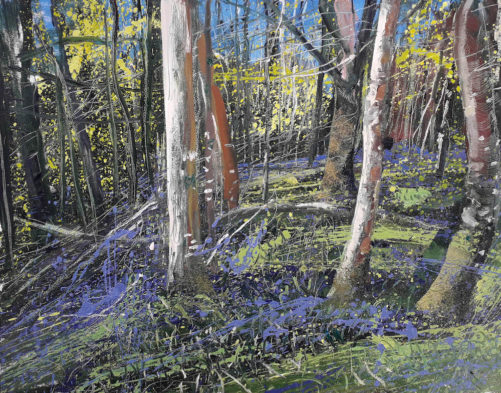 Works from award-winning artists Neal Greig and Simon McWilliams will feature in the May Gormleys Fine Art monthly online exhibition on Gormleys.ie.

“Exploring the language of paint and investigating creativity of the moment are fundamental aspects on my journey of making a painting,” said Greig, who was elected as a member of the Royal Ulster Academy in 2018.

“I employ a directness of articulation and economy of language. At times areas are left understated while other areas are the focus of attention.

“In a sense I am painting an organic, natural space rather than a picturesque view of the landscape. I am not averse to the beauty and interconnectedness of things.”

Born in Belfast, McWilliams trained initially at the University of Ulster before going to the Royal Academy School in London, and has received almost 30 awards for his paintings over the last three decades.

Drawing on Belfast’s past, present and future, his paintings combine both realist and abstract visions of a changing world where palm houses come to occupy the same territory as modern office blocks and radio masts.

His vibrant, structural urban landscapes are intertwined with organic elements of smoke and vegetation — his pieces are attractive abstractions that reveal the artist’s relationship with the places that fascinate him.

Gormleys have integrated a new Irish-made app, ArtVisualiser, across their site which uses virtual reality to visualise a selected piece of artwork from the Gormleys.ie site.