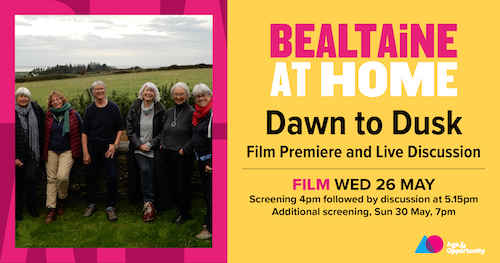 One of the oldest and most powerful of mythical beings associated with Ireland, the Cailleach (a witch or wise old woman) forms part of the Great Goddess trinity, alongside younger incarnations as the maiden and the mother.

Bealtaine Festival 2021 is pleased to present the premiere of Dawn to Dusk, an artist documentary film by Therry Rudin which observes and documents the artists’ collective Na Cailleacha, of which she is a member. Na Cailleacha are six visual artists, one jazz musician, and a curator-writer who came together during 2020 to explore being female, older and hopefully wiser.

The screening will be followed by a roundtable discussion with filmmaker Therry Rudin, Curator-writer Catherine Marshall (both members of Na Cailleacha) and artist Aideen Barry. The event will be chaired by Gráinne Humphries, Festival Director of the Virgin Media Dublin International Film Festival.