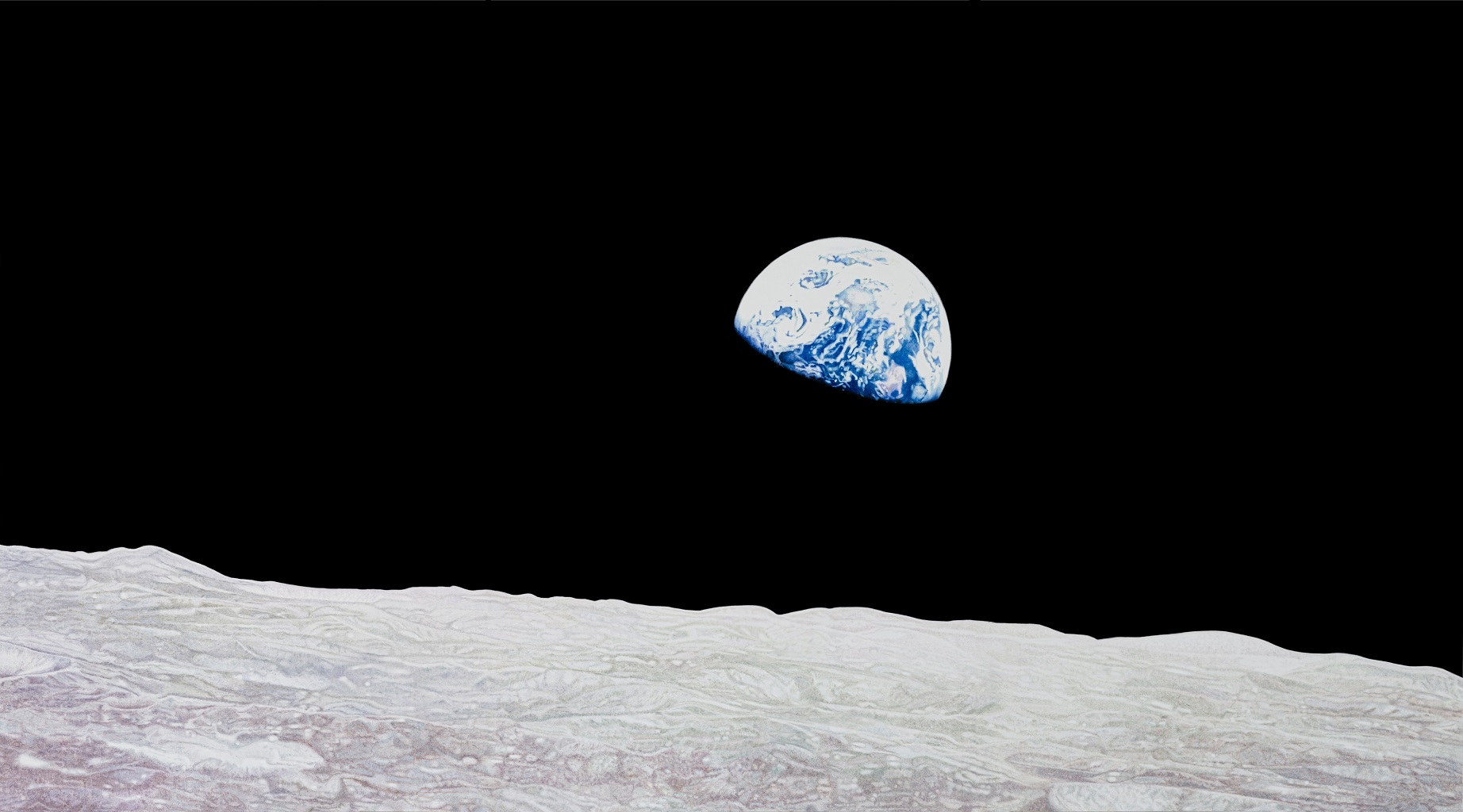 This exhibition invites the viewer to see planet Earth through fresh eyes. First, a series of intimate images draws the viewer into an up-close engagement with the intense beauty of a living world often overlooked or taken for granted. The images explore the organic forms of an Earth resonant with life. In these encounters the evocation of light, colour, and texture open up new vistas of the hidden, breathing planet. A flower aflame with the sun, a hint of a cetacean moving in the great ocean, fungus settling into new colour, haws gleaming on stalks – each image hints at worlds within worlds unfolding before the eye which pays attention. The taken-for-granted is given the gift of being seen.
Then, the exhibition brings the viewer into a direct visual encounter with the Earth in its totality using the iconic image taken by William Anders in 1968 from the Apollo 8 moon mission. Here, the human eye is presented with a painting of the first ever picture of its planetary home. The scale of deep seeing is now that of the planet itself. The marvel of life and its fragility is revealed when the blue Earth is seen against the vast expanses of dark space. This image shows an Earth on which all life is connected, and no borders exist. The journey from the micro realms to the macro sphere of the planet situates the human within the community of shared being.
In an era of climate peril and habitat loss, this exhibition challenges us through life-celebrating meditative observation to enter the depth of what it is to fully be in harmony with all that surrounds us.

Pauline Garavan’s practice is based primarily in paint and some small scale sculpture. She is represented by The Trinity Gallery, Dublin. She has shown her work in many solo shows and has exhibited widely in selected and open group exhibitions. Her work is held in public and private collections in Ireland, the UK, and the United States. In November she will travel to Krems in Austria, to take up a one month artist residency.

In 2019 she was selected to travel to Philadelphia to exhibit her work in the Straight Out of Ireland exhibition. In 2016 her work Shackleton’s Endurance was shown in Athy Library as part of Co Kildare’s official Centenary celebrations of the rescue of Ernest Shackleton’s crew off Elephant Island in the Antarctic. This work now forms part of the permanent collection of the Shackleton Museum in Athy. Her work has also been shown in the Royal Hibernian Academy; Royal Ulster Academy; The Dock, Carrick-on-Shannon; The Cork Vision Centre; Íontas Arts Centre, Co Monaghan; Leitrim Sculpture Centre; The Kenny Gallery, Galway; Linenhall Arts Centre; The Higher Bridges Gallery, Enniskillen; National Museum of Ireland – Country Life, Castlebar; Ballina Arts Centre; The Trinity Gallery, Dublin.