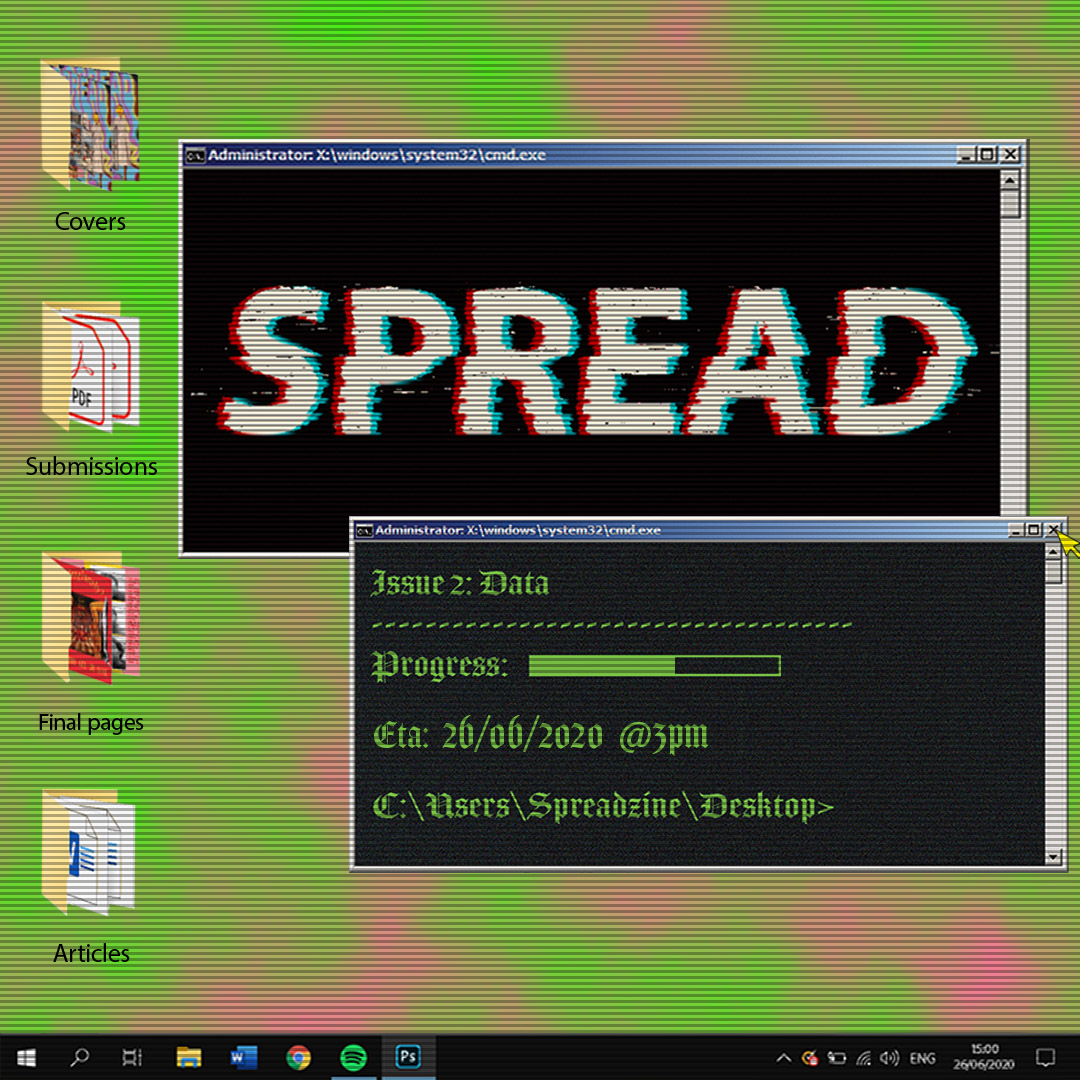 A new forum for writers and artists, Spread launched at the Sex Workers Alliance Ireland Art Exhibition in December 2019 and received a warm welcome from the community. The first issue, of which 25 were printed, introduced Spread as an accessible space for critical conversations about music, sex and DIY culture in Ireland.

Under the theme of ‘Data’, artists and writers answered Spread’s open call with poetry, essay, illustration, graphic design and collage.

Issue two will be available for download from Lazer Guided Reporter on Friday June 26 at 3pm. A discussion will take place via Spread’s Facebook and Instagram live at 7pm, with JaJa Studios in conversation Spread editors and musical performances from Craig Cox and Darragh O’Brien.

The decision to extend the March 2020 issue into the summer as a digital format allowed the team to include a feature about the Covid-19 crisis, while eliminating financial barriers for readers. When editors Yvonne Kiely and Mairead Mullan heard that JaJa Studios were fundraising for a new studio space, having been evicted from their previous home in Stoneybatter, they got in touch to offer the second issue of Spread as a platform to help JaJa reach their GoFundMe target. Spread is accepting donations via their GoFundMe page.

“Our hope with Spread is that it will encourage people to get involved in the conversations that the zine puts out there and to create new conversations. Making art and publishing work is difficult in a society that devalues creative endeavours. The commercial aspect of media and publishing is something that I think about a lot. It inspired the creation of Spread”

Art is hard. Writing is hard. Getting your stuff out there can be even more difficult. Hence, the creation of Spread, a platform for anyone and everyone to do just that and have it seen. Spread is a project borne of passion and intent, that of joining the do-it-yourself movement of zines, while creating a space to nurture and promote artists, writers, poets and anyone else who wants to join.

Spread issue two is free for readers and available for download from Lazer Guided Reporter. The team welcomes donations of any amount from readers via their GoFundMe page, with 50% of all donations going towards JaJa Studios.

Readers can pre-order issue two through the signup form on Lazer Guided Reporter to receive a copy of the zine via email as soon as it’s released.

Yvonne Kiely looks after the written work at Spread. She is a music journalist and band manager living in Dublin, and she has presented her research into gender representation in the music magazine industry at conferences in Ireland and abroad.

Mairead Mullan handles the design and visuals at Spread. An upcoming artist, who was involved in the Limerick art scene before making the switch to Dublin, where she is a member of the A4 Sounds studio. Her work revolves around the figure of the feminine Other and the mythos of the Self.