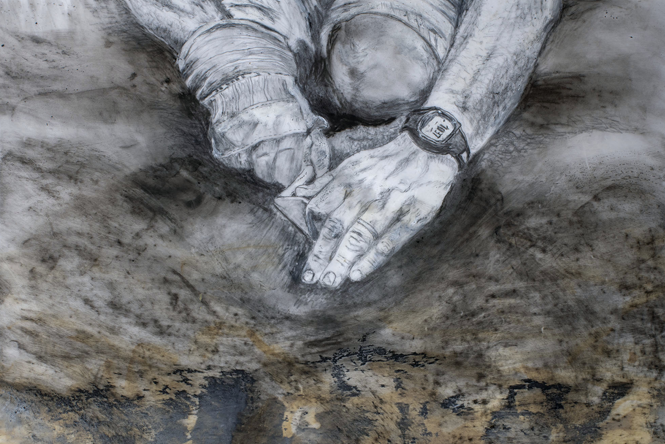 Around eight hundred years ago a group of Cistercian monks from France arrived in Beymore, to the south of Drogheda, and set up a medieval grange at Beaubec, to farm wheat and other foodstuffs for export to their motherhouse in France. Between 2019 and 2021, an archaeological investigation of the site uncovered the remains of a barn and dormitory. Archaeologist and artist John Sunderland undertook a residency at the site during the excavations in 2021, making work from the materials discarded by archaeologists in the process of digging. This exhibition shows the result of this investigation of the two crafts of archaeology and art, drawing using archaeological soils and skills involved in excavation. John used a hybridised process to investigate the importance of touch in the excavation, something he considers to be one of the closest ways of experiencing and subsequently imagining the past directly, as it exists in the present.

The residency was part of The Beaubec Project, a community and research archaeology project run jointly by archaeologists Matthew and Geraldine Stout and the landowner John McCullen with his daughter Grace McCullen. The excavation and residency were funded by the FBD Trust.

In August John will be leading a workshop for young adults on site at Beaubec during heritage week which is funded by Change X and a lunchtime talk involving the archaeologists Matthew and Geraldine Stout, landowner John McCullen and artist John Sunderland will take place in Droichead Arts Centre, Stockwell Street on the 20th August.