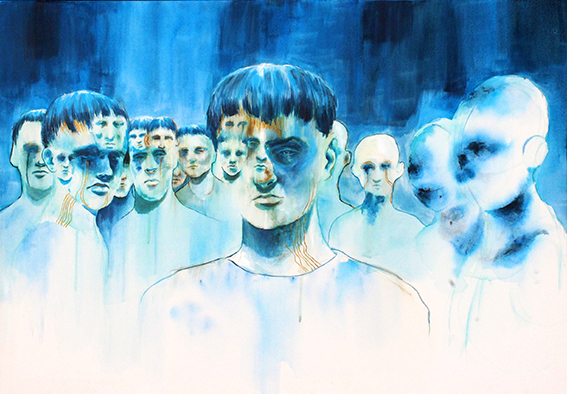 “Vision” is inspired by the philosophy of decadence, a movement began by thinkers that wanted to visualize the interior world and establish an understanding of the subconscious, and it would later contribute to the birth of Freudian psychology. The artworks present are characterized by multiple styles and techniques, united by the same sensitivity. It’s a diary of thoughts and emotions, exploring every corner of our soul, conveying every mood of the artist from joys to pains; a naked expression of oneself. The attempt is to challenge mental health prejudice and stigma with no fear, to help people accept themselves and their fragility.

Naomi Zanardo is an Italian freelance illustrator based in Dublin. She expresses her art through varying analogue techniques including watercolor, pencils, acrylic on canvas and paper, but also works with other disciplines including digital painting and crafting collages on Photoshop, as such her work covers a broad spectrum from the traditional to the contemporary. Since childhood her greatest passion has been drawing and has found in it a form of therapy that helps to articulate her fragilities and delusions. From the philosophy of decadence and its related writers to indie-rock and electronic musicians, Naomi has drawn varied influence on her art and style. Often, her focus tends toward the human portrait and the attempt to portray introspection through abstract figures.