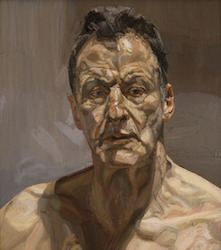 IMMA has announced that it is extending its inaugural Lucian Freud exhibition until 7 January 2018, and is celebrating the first year of IMMA Collection: Freud Project with a two-week period of free entry for all visitors to coincide with the October mid-term and Halloween Bank holiday.

This landmark exhibition features 50 works by one of the greatest realist painters of the 20th century – Lucian Freud (1922 – 2011), on five-year loan from a number of private collections.

The current exhibition, now extended until 7 January 2018, is the first installment of a five-year educational and cultural initiative. Throughout this unique project IMMA will present a series of different and exclusive Lucian Freud related exhibitions, with a new programme talks, openings, book clubs, research projects, artist residencies and other events each year.

All 50 works have been on display across this first year and will continue to be on display until 7 January 2018. A new exhibition entitled The Ethics of Scrutiny, curated by Irish artist Daphne Wright, will then open in early February 2018. This, and subsequent exhibitions, will include works and new commissions by other modern and contemporary artists in response to Freud, and will reveal exciting new perspectives on this major artist today.

Renowned for his portrayal of the human form, Lucian Freud is best known for his intimate, honest, often visceral portraits. Working only from life, Freud’s studio was intensely private and he mainly worked with those he was close to, often asking subjects to sit for hundreds of hours over multiple sittings to better capture the essence of their personality. The works in the exhibition, housed in the specially designated Freud Centre in IMMA, mainly date from 1970 onwards and explore several of the artist’s key themes – works that reflect his interest in people and the natural world.