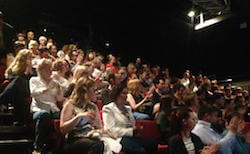 NCFA hosted a public meeting for the arts community in Project Arts Centre on Thursday 9 June. The purpose of the meeting was to create a forum to discuss recent issues concerning the arts sector and to consider the viability of the setting up of a movement similar to What Next?

What Next? is a national movement of arts and cultural organisations, artists, funders, policy makers, institutions, and individuals in the UK who come together regularly to articulate and strengthen the role of culture in society.

Speakers at the event included Hannah Bird (National Movement Lead, What Next?) and Brian Sheehan (Co-Director, YES Equality). The event was chaired by Jo Mangan and Maria Schweppe and generated a productive conversation with many important points being raised from the audience.

The general consensus was that we need to communicate a clear and positive message to galvanise the support of the public and the sector as a whole. This should include all cultural practitioners not just those in receipt of public funding. It was acknowledged that while increased funding of the arts sector will be part of the goal of the current campaign, the main task will be to bridge the gap of understanding and articulate the value of culture as a vital, intrinsic part of our society, experienced and owned by all.

Video footage of the event can be viewed here: www.periscope.tv/Campaign4Arts/1RDxlOlrlOoJL

The tag #‎whatnext4arts‬ is trending updates and opinions on the topic.

The next meeting will take place in Temple Bar Gallery + Studios, 8.30am – 10.00am, on the 15 June to discuss ways in which to move the campaign forward, in particular ‘how to get the public to advocate for the value of the arts.’

There will be no speakers at this meeting and it is open to anyone to attend. It is hoped that this will be the first of weekly meetings for members of the arts and culture community to attend.