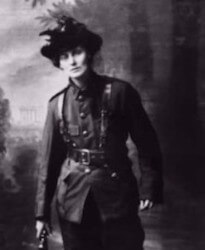 One hundred years after the Rising, the many roles of women in Ireland’s revolutionary period are increasingly being acknowledged. As was the case during her own lifetime, the most publicly visible of all of these has been Constance Markiewicz. Her prominence as both revolutionary and later politician was also reinforced by an active construction of her own identity through contemporary photographs.

The image of Markiewicz as glamorous revolutionary has proved remarkably durable. To what extent, however, does this focus obscure our knowledge of other women who played significant roles in 1916, such as Nora Connolly, Kathleen Lynn or Margaret Skinnider?

This talk, Markiewicz and the Others: representing women of 1916, engages with the dual focus of the exhibition Beyond the Pale in using a range of visual material, including both photographs from the Rising and the work of artists today, to reveal and explore the diversity of women’s roles in 1916 and subsequently.

Fionna Barber, lecturer and writer, is Reader in Art History at Manchester School of Art.