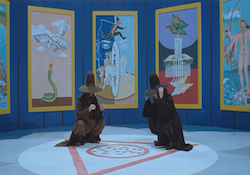 ‘As Above, So Below: Portals, Visions, Spirits & Mystics’ is a major international exhibition taking place at the Irish Museum of Modern Art from April 13th to August 27th which examines the role of spirituality in visual art from a wide range of perspectives.

In keeping with the artworks in the exhibition, the films that feature here, from directors as diverse as Krzysztof Kieślowski, Ingmar Bergman, Barbara McCullough and Robert Altman, transcend the limitations of and expand upon what is conventionally understood as spiritual to embrace ideas around mysticism, ritual, human consciousness, the otherworld and the occult. While a direct correspondence or through-line can be discerned in some instances – Alejandro Jodorowsky and Kenneth Anger feature both in the exhibition and in this film selection, thereby providing the opportunity to engage with their extraordinary work in different contexts – in other cases, the connections are less explicit, giving the viewer the chance to perceive for her or himself possible kinships between specific films and artworks.

‘As Above, So Below: Portals, Visions, Spirits & Mystics’ is co-curated by Sam Thorne, Director, Nottingham Contemporary, UK, and Rachael Thomas, Senior Curator, IMMA. For more details on the exhibition see www.imma.ie