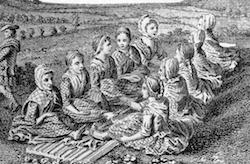 South Dublin County Council has announced six new public art projects set to be commissioned under IN CONTEXT 4 – IN OUR TIME, its public art programme 2016-2019 as part of the Per Cent for Art Scheme.

Writer Nathan O’Donnell’s project, The Mill, will engage with a group of young people in Clondalkin to produce a magazine, derived from a history of radical publishing. The project departs from a specific local history: that of the Clondalkin Paper Mills Action Group, which led a series of major strikes and occupations in 1982-3.

Visual artist Sarah Browne’s project imagines the gym or leisure centre as a space of transformation. The project intends to explore physical movement and non-verbal experience, to create unexpected encounters and opportunities for reflection and learning.

The Central Field is a proposed large scale temporary land artwork conceived by artists Rhona Byrne and Yvonne McGuinness that draws on the idea of an amphitheatre. This contextually responsive project is responding to the stalled planning process in Adamstown and aims to engage local residents in unearthing and reimagining a shared public realm.

Visual artist Fiona Dowling and composer George Higgs will collaborate with workers from a cross-section of workplaces, both industrial and rural, to create Work Songs, a musical portrait of South County Dublin’s economic profile. Rhythms, cycles, movements and sounds of work routines will be transformed into song and performed by workers.

Inspired by Oisín I dTír na n-Óg, who carried a boulder up the mountains near Tallaght, Ciarán Taylor’s Rock to the Top invites the people of South Dublin to take up the challenge of recreating this mythic feat. Participants will chip pieces from a boulder at The Square Tallaght and carry them along the Dublin Mountain Way to make a cairn at the foot of Kippure. Connecting city with mountains, the project asks ‘Why are we drawn to high places?’. Stories of the walks and performances will be retold in sound and pictures.

Clamour + Roar – A Citizens’ Chorus is a mixed discipline, multi-generational, cross-community participatory art project which will culminate in an original theatre performance devised by theatre artist Veronica Coburn. Inspired by the physical geography, past and present, of South County Dublin, the project will feature a community chorus, professional actors, a live vocal score both spoken and sung, performed narrative text, and a filmed visual art design.