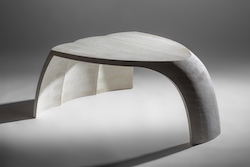 The trustees of the Golden Fleece Award are delighted to announce that the winner of the 2017 Golden Fleece Award is John Lee, a craft-based cabinetmaker from Co. Meath. The €15,000 prize was awarded on 21st February at a ceremony at the RHA, Ely Place, Dublin 2.

A graduate of the furniture college in Letterfrack, Co. Galway, John is a third generation cabinetmaker and has exhibited extensively both nationally and internationally. His work has been shown at SOFA Chicago, COLLECT at the Saatchi Gallery, London and DESIGN BASEL in Switzerland. His furniture can be found in numerous private collections and in museums, including the National Museum of Ireland where his ‘Carrigeen’ tallboy and ‘Core’ low table can be seen. In 2011 John won a prestigious commission to design and make a new Presidential Inauguration Chair to be used in the inauguration ceremony of President Michael D Higgins and in future presidential inaugurations.

John’s work is inspired by naturally occurring geometric forms and his current work explores the enhancement of timber’s natural properties while experimenting with form, function and finish.

The Golden Fleece Award, now in its 16th year, is the most valuable prize available to Irish artists and craft makers. It is an independent artistic prize fund established as a charitable bequest by the late Lillias Mitchell who died in 2000. The first Golden Fleece Award was launched a year later and was awarded in 2002.

For more information and images please contact Dairne O’Sullivan at dairnemosullivan@gmail.com or call 087 680 1443