Laura Gannon discusses three recent projects to illustrate the progression of her Practice. 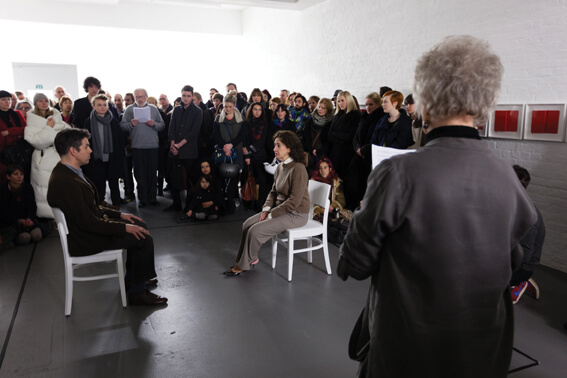 Laura Gannon, The Heat of the Day performance, 2013, DRAF, London

During 2002, I moved to London to undertake an MFA at Goldsmiths College. I’ve been based in London ever since. There is a noticeable difference between working as an artist in Ireland and the UK – especially working in London. Scale and access are the biggest differences: access to education, different forms of culture, artists, curators and pluralistic modes of thinking.

Living in a city of eight million people poses challenges around both the visibility of one’s practice and finding a place for production. It has taken me time to get a functional studio established. I am now finally based in a small studio complex – Tudor Grove Studio in Hackney – whose other occupants include Fiona Banner and Simon English. It is a very intimate community, which is simultaneously autonomous and supportive.

I maintain ongoing conversations with artist and curator peers. Through these networks I engage with the London art ‘village’ and regularly visit galleries such as the Rowing Project, Almanac, Kate MacGarry, Herald Street, Laura Bartlett, Hauser and Wirth and Spruth Magers. I am currently completing a part-time one-year sculpture course at City Literary Institute in central London, through which I’m exploring materiality and making techniques.

I use the Lux artist moving image archive for research and attend talks programmes at the Chisenhale, the Showroom and Gasworks. I also go to the curated artist film programmes at the ICA, Whitechapel and Tate Modern. While my research is primarily studio-based, on occasion I’ve utilised the British Library, Westminster reference library and the RIBA British Architectural Library. For professional development and information, I use websites such as Lux, Artforum, e-flux as well as receiving gallery mail-outs.

To give a snapshot of my ‘career development’, I’ve chosen to look at three projects: the making of my film A house in Cap-Martin (2007 and 2013); participating in the LUX Associate Artists Programme (2008 – 2009); and The Heat of the Day, a commissioned performance work for David Roberts Art Foundation, London (2012 – 2013). These projects mark some key developments in my thinking and production processes, including a focus on architectural locations and combining these with literary sources to produce narratives and performance-based works.

A House in Cap-Martin (two-screen super 16 mm film, 2007) was inspired by Eileen Gray’s letters to Le Corbusier about her house E1027. The building was designed by Gray with Jean Badovici between 1926 and 1929, and is located on the French Riviera, overlooking the Bay of Monaco. In her correspondence with Le Corbusier, Gray expresses the view that the murals he had painted inside the building were a form of vandalism and that she could never revisit the house.

This film was a significant step for me, in terms of scale of working and the scope of ambition involved in exploring subject matter through engaging with academic research and analysis, specifically the notable work of architectural historian Beatriz Colomina, who had taken a position against Le Corbusier’s mural drawings.

The Arts Council of Ireland and the Elephant Trust, London supported the making of this work. Culture Ireland supported the London and San Francisco exhibitions of the work in 2008 and 2011. I worked with an English and French film crew, which included a cinematographer, sound engineer and focus puller. For post- production I worked with an editor and sound designer.

I’d first visited the site of Eileen Grey’s E1027 in 2006. At this time, the house was inaccessible and closed to the public. I was struck how in the iconic black and white archive images of the house, depicting it as gleaming, stranded ship attached to land, contrasted to the dilapidated condition that I found E1027 to be in. I’d heard that the house was about to be restored and converted into a study centre for architects, and I became interested in capturing this moment before it ceased to function as a residential space.

I devised three character’s: a fictional older Eileen Gray circulating the exterior of the house depicted on the left screen, with Le Corbusier and Badovici shown measuring and discussing the interiors in slow motion on the right screen. The resulting film deliberately played with temporality – slowing time, merging past and present, combining fact and fiction. As a further play on time, I am in the process of writing a narrative to be spoken by the Eileen Gray character. The new version of this work will be shown in the Glucksman Gallery, Cork in November 2013.

I was one of eight artists selected for the 2008 – 2009 LUX Associate Artists Programme (AAP), a 12-month post-academic development course for artists working with the moving image. The programme offers a mutually supportive context in which to develop work, and to benefit from networking and learning opportunities with arts professionals closely involved in artists’ moving image, with funding to realise a final group project. 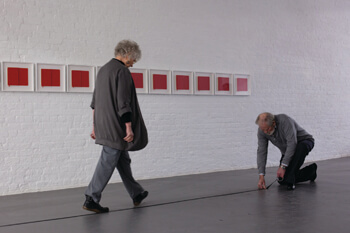 Laura Gannon, The Heat of the Day performance, 2013, DRAF, London

The programme served to fill in some of the ‘cracks’ left over from my time on the Goldsmiths MA – there weren’t any faculty members who specialised in artists’ moving image work while I was on the course. Key outcomes arising from my participation in this year-long dialogue with my peers included the expansion of my practice to include drawing and performance as modes of production alongside my film-making.

In 2012 Vincent Honore, the director of the David Roberts Art Foundation (DRAF) in London, invited me to make a live event in response to the launch of their new space in Camden and its inaugural exhibition, ‘A house of Leaves’ (12 Oct — 23 Feb 2013). The invitation arose from our ongoing dialogue; Honore had previously written about my work and had done frequent studio visits.

The show took its title from a novel of the same name by Mark Z Danielewski, the main narrative of which features a family who discover that their house is changing; the interior of the house seems to be expanding, while maintaining the same exterior proportions. My piece was motivated by an interest in developing a mode of working I had first explored in 2011, in a piece I presented at the ICA using three actors to create a live reading of collaged texts – from Elizabeth Bowen, Maeve Brennan and Jean Rhys – on the occasion of the launch of the Lux publication 8 Metaphors (Because the Moving Image is not a Book). (1)

For the DRAF show, I used Elizabeth Bowen’s (1948) novel The Heat of the Day as the starting point for a work of the same title. I choose this book because of its setting – wartime London – in a house adjacent to the DRAF gallery space. I wanted to think about the history and location of the gallery and the events that could have preceded the space becoming a gallery.

The book featured detailed, almost cinematic, descriptions of buildings and interior spaces. In the novel, the apartment at the top of a building becomes the temporary refuge for a woman who doesn’t know if her lover is a spy. I extracted sentences that described the protagonists’ behaviour within the apartment, along with other descriptions of architectural spaces, both interior and exterior. From this I created a new text for four voices.

I chose actors who were in their 80s to read the parts of Narrator 1 and Narrator 2, and two younger actors in their mid-40s to play the parts of Male 1 and Female 1. In the performance, the older actors measured out the approximate floor plan of the apartment and marked it out with tape on the gallery floor. They then placed two chairs facing each other in the space and the younger actors entered the space and sat on the chairs. The narrators remained outside the marked out space, facing each other. This placement of the quartet presented the younger actors as the ‘younger-selves’ of the older narrators. To emphasise interplay between memory and experience, the older actors appeared to read from notes, while the younger actors spoke spontaneously in the present.

The Heat of the Day was funded and supported by DRAF and an award from the Arts Council of England. I applied directly to the Council, with an endorsement from DRAF, for a production bursary to allow me to employ four actors and work with them over a series of workshops to develop the piece. The main difference between the English and Irish Arts Council application processes is that the English process features rolling deadlines and is led by the applicant’s requirements  – be they an artist or institution – rather than being governed by predetermined award categories. The applicant also has access to council officers and receives feedback during the process. However, this doesn’t affect the outcome of the result, it just ensures that applications meet all the Council’s criteria and is deemed fit for consideration.

Although I am based in London, I maintain links with Ireland in my work. I am currently researching material for a new film entitled The Cat Jumps, which features two women in their 80s responding to a Leonora Carrington short story, as well as discussing their own past experiences. The setting is a house by the sea in West Cork. Another work in development explores links with women from the west of Ireland including Nora Barnacle, Grace O’Malley and Margaret Bourke-Sheridan – women who found ways to represent themselves and function in exile under very different circumstances.

Overall, I would say that an internal logic drives the momentum of my art career. The more that I let the work lead – in what Agnes Martin described as a process of “following inspiration” – the more infrastructures have fallen into place around various projects to make them possible. Underpinning this process is a dogged persistence – a determination to go on, to respect the work and create the optimum environment in which to make my work happen.