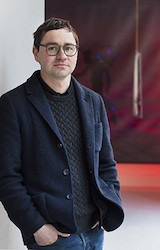 EVA International are delighted to announce the appointment of Matt Packer as the new Director of Ireland’s Biennial. Matt comes to EVA from CCA Centre For Contemporary Art Derry ~ Londonderry, where he has been Director since 2014. He has extensive experience as a curator in a temporary exhibition context nationally and internationally; he co-curated the Lofoten International Art Festival – a biennial exhibition in Norwa

Matt will curate the 15th edition of Tulca Festival of Visual Arts in Galway and was part of the selection committee for the British representation at the Venice Biennale 2017. Matt previously held the role of Curator of Exhibitions and Projects at Lewis Glucksman Gallery, University College Cork from 2008 to 2013.

Of his appointment Matt says, “I am delighted to be announced as Director of EVA International, an organisation that I have seen transform since I first arrived in Ireland almost ten years ago. Now approaching its 40th anniversary, it’s remarkable how EVA has continued to set the horizon for changing ideas of artistic and curatorial practice, while also being respondent to broader cultural and political changes that have impacted Ireland and its relations to the wider world. Given its enormous legacy, I am very proud to be entrusted with the job of developing EVA over the coming years, strengthening its voice and deepening its impact at local, national and international levels.”