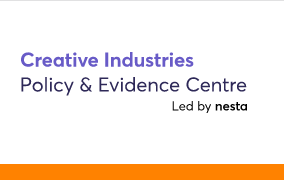 This report details the results of a survey of employers commissioned by the Creative Industries Council (CIC) from December 2017 to January 2018. The CIC survey ‘piggybacked’ on the Department for Education’s UK Employer Skills Survey (ESS), which was undertaken in Summer 2017, making use of its robust sampling strategy to ensure that it provided comparable estimates across creative sub-sectors and, where sample sizes permitted, the ability to explore issues in individual sub-sectors, size groups and different parts of the UK. It was based on 700 telephone interviews.

The results show that in January 2018:

About the PEC
The vision of the Creative Industries Policy and Evidence Centre (PEC) is to provide independent research and authoritative recommendations that will aid the development of policies for the UK’s creative industries, contributing to their continued success.

The Centre provides a step-change for our three main stakeholders – industry, policymakers and the wider research community – in the quality of evidence for the creative industries, asking some of the best researchers across the UK the most pressing questions about the sector.