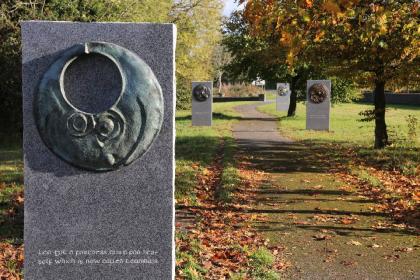 The sculptures were installed at the picnic area on the Portarlington approach road in Geashill. The sculptures take inspiration from the mythological Battle for Ireland which took place between two brothers Éremón and Éber. In 2015, Pat Foley submitted an outline of The Battle of Geashill story for a Secrets of Offaly competition run by Offaly County Council. Then in 2017, Clemens Von Ow published his beautiful book, Heremon & Heber and Battle of Geashill to widespread acclaim.

As described by the sculptor himself they are, “five galláin, Irish for standing stones, to commemorate some of the protagonists in the legend: Amergin, Éber and Éremón, sons of Míl as well as the Éremon’s wife Tea.

“The fifth gallán is dedicated to Geashill itself, a place rich in heritage, history and mythology. Inserted into the stone are low-relief plaques inspired by circular Bronze Age objects: shields, sky and sun disks and a lunula. Each object interprets the personas, attributes and topographical features associated with the individual.”

These sculptures were made by first placing the sheets of bronzed zinc face down on a bed of sand, and then hammering out the design on the reverse using a Bronze Age technique called répoussée. The shields were then mounted on large blocks of granite with inscriptions on front and back.

A 6th piece will take the form of a hoard of objects and will be attached to a granite stone and set in the ground. Holger has cast the pieces from wax moulds made during a workshop conducted with Karen Hendy in the village in late August.