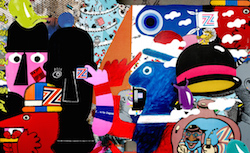 The 27th World Festival of Animated Film – Animafest Zagreb 2017 – is now open for submissions by filmmakers from all around the world.

Festival’s submissions are open to films applying all animation techniques, including combinations with live action and documentary. Only films completed after 1 January 2016 and never previously entered in the Festival, are eligible for entry.

Animafest 2017 has four (4) main competition categories and the total prize fund amounts to 9,500 Euro — of which 2,500 Euro are reserved for the Grand Prix award — awarded to both short and feature films.

This year’s competition categories are:

The list of films selected for the competition programs will be announced on the Festival’s official website not later than 1 April 2017. All applicants will be notified regarding the selection results.

Each director whose film is chosen for the official festival program will be contacted by the Festival management for hospitality arrangements.

For more information and to apply see: animafest.hr/en/2017/film_submission
No Submission Fee to apply.