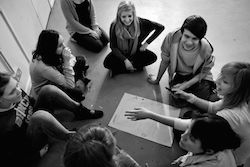 b-side would like to commission a film maker/s to produce a 3 minute short creative film with the young people of Weymouth Space Youth Project. SPACE support Dorset’s youth who are or may be Lesbian, Gay, Bisexual or Transgender.

b-side are in the process of writing and recording a song with a group of young people from Space Youth Group (LGBT group) in Weymouth. They are working with Bristol songwriters Rosina Buck and Brontë Kirkby, Rosina worked on #MyClitoris a music and film project for young people to spread awareness of female genital mutilation. For more information: http://bit.ly/2hnCGJY

After this they plan to create a short music video for the song (this is where you come in). The song and the film will both stimulate a guided discussion to tackle stigma as well as raise awareness of phobic behaviour and the mental health issues that arise when individuals are socially isolated.

b-side would like to commission the creation of a 3 minute short creative film with the young people of Space Youth Project. They would like to create a colourful and vibrant music video to work with the song they have created. The film must be upbeat and playful as well as tackle important issues around LGBT and social isolation.

The aim is to create a music video that we can share on social media and tour to local schools in Sept 2017. They would like the video to be available for a premiere viewing in the last week of May.

The film maker(s) will be working alongside around 10 members of Space Youth Project to create the film.

The film maker(s) will need to commit to 2 meetings with young people from SPACE prior to the film making (preferably on the 1st and 3rd Wednesday of the month).

The film maker(s) will commit to at least 1 session (or the equivalent) to teaching young people from SPACE some skills in film making.

b-side are offering a fee of £3,500 (This fee includes artist fees, materials, production and post production, and travel). b-side would like the work to start in March and coincide with SPACE’s regular meetings where possible (evenings 1st and 3rd Wed of the month).

The meetings and filming will take place in Weymouth and /or in the surrounding areas.

For all information on b-side: www.b-side.org.uk