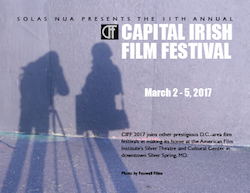 Solas Nua reminds Irish filmmakers and anyone making films about Ireland and the Irish that submissions for the 2017 Capital Irish Film Festival (CIFF) will close on Sept. 30, 2016. Submissions are free and can be registered online at www.solasnua.org

CIFF showcases films about subjects pertaining to all of Ireland, Irish identity and culture or that are examples of Irish artistry. Entries are invited for feature-length or short films, including comedy, drama, documentary, animation, experimental and musical. CIFF welcomes Irish language films, which must contain English subtitles.

Submissions can be made with online screeners, such as YouTube or Vimeo links, but filmmakers’ that are accepted must be able to provide for festival showing two Blu Ray discs, a DCP or USB storage device containing the film. Accepted films must also be accompanied by trailers and/or stills for marketing purposes.