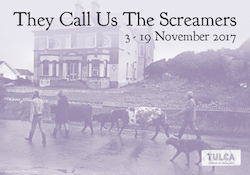 TULCA Festival of Visual Arts is pleased to announce that the 15th edition will be curated by Matt Packer titled They Call Us The Screamers. Matt Packer is a curator, writer and Director at CCA Derry – Londonderry.

They Call Us The Screamers takes its title from a book written by Jenny James, which details the history of the radical primal therapy commune (Atlantis) that she established in the West of Ireland in the mid 1970s. The book tells the story of arrival in Ireland, the aspirational life of the commune, and the public notoriety that followed.

Atlantis sought an alternative way of life, unmediated by traditional societal, technological, and commercial values. During their time in Ireland, the community of Atlantis focussed on ‘de-programming’ themselves from the modern world through self-sufficient farming, collective living, and psychotherapeutic exercises that took inspiration from Wilhelm Reich, Arthur Janov and the People Not Psychiatry movement; many of those in the commune refused the state support of medical and educational services for themselves and their children. In James’ own words, Atlantis was an attempt to ‘turn its back on the entire project of modern civilisation.’

Although generally welcomed by local people, the lifestyle behaviours of Atlantis did attract the unwelcome attention of newspapers, social services and police authorities. They were nicknamed ‘The Screamers’ in a 1976 Sunday World article, referring to their practice of primal scream therapy. This was a form of psychotherapy developed by Dr Arthur Janov that sought to re-enact the traumas of birth and reverse the neurosis that follows in later life. John Lennon, Yoko Ono, and Steve Jobs were among the many advocates of primal therapy during this same period.

Atlantis did not have a fixed membership or strict organisational structure. In 1993, after almost 30 years in Ireland in one iteration or another, coinciding with broader cultural and political changes in the country (the Troubles in the North; the wane of the Catholic Church; EU citizenship; economic modernisation), the core members of Atlantis set sail for Colombia in a refurbished boat, where they remain today.

The exhibition They Call Us The Screamers is a project that uses the history of Atlantis in Ireland as a narrative framework of references. Their story is a story of anti-modernism, cultural withdrawal, primal voice, self-enlightenment, and an attempt to establish new forms of social relations in a world that otherwise seemed doomed. The exhibition will include artworks that variously connect with these ideas and reference points, while also proposing their relation to the crisis (and neurosis) of our present day. Alongside material from the Atlantis archives, They Call Us The Screamers will be curated through invited artistic participations and an Open Call process.

(Optional) Where new work is being proposed please include a clear outline text not to exceed 250 words. Please include any sketches or visualisations in the PDF document, and any available information on costings, materials, and venue requirements etc.

Applications should be submitted via email to opencall@tulcafestival.com

For further information on how to apply to this years open call follow the link here: www.tulcafestival.com/opencall/