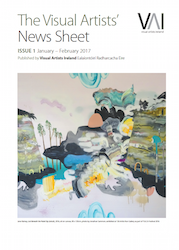 Writer and researcher Joanne Laws is the guest editor of the Jan/Feb issue of the VAN, out now.

On the subject of art writing , publishing and readerships, Marysia Wiezkiewicz-Carroll reports on the ‘Art and Writing’ programme organised by Paper Visual Art and Gorse journals. In a similar vein, Nathan O’Donnell offers insights into the panel discussion ‘Art, Writing, Narrative and its Territories’, which coincided with Katrina Palmer’s solo exhibition ‘The Three Stories are Flattened’ at Void, Derry.

A number of Irish residencies also feature: Suzanne Walsh reports on the ‘Resort Revelations’ residency programme in Portrane, Colin Martin provides an overview of the ongoing Tony O’Malley Residency for painters and Jessica Foley reflects on her participation in ‘The Centre for Dying on Stage #3’, an intensive six-week residency at Cow House Studios, County Wexford.

As ever, we have details of upcoming VAI Professional Development Programme, exhibition and public art roundups, news from the sector and current opportunities.