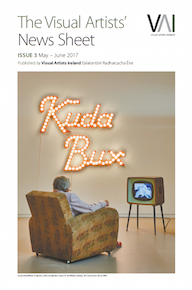 The Visual Artists’ News Sheet is the primary all-Ireland information resource for visual artists presenting case study articles on all aspects of the lives of professional artists, alongside features offering critical reflection and analysis of relevant aspects of the art world in Ireland and internationally.

From late-February to mid-April, a series of public meetings were held across the country as part of the Creative Ireland programme, a five-year government initiative which seeks to place creativity at the centre of public policy. Joanne Laws’s VAI News column outlines what transpired at the Roscommon and Leitrim meetings. In other columns, Pádraic E. Moore describes a revived interest in 1970s industrial music, probing the crossovers with performance art. Our Northern Ireland column comes from artist and researcher Laura O’Connor, who discusses the WANDA Feminism and Moving Image event which took place in Belfast in February 2017. Martin Waldmeier’s column tackles ‘The Problem of Jargon’ within the art world and introduces Plain English Criticism, a concept explored by Art and Disability Ireland, who invited Michelle Browne to write a review for the Critique section using this pared-back approach to language.

In the How is it Made? section, we have project profiles from Matt Packer and Alissa Kleist, who discuss CCA Derry’s touring exhibition ‘Scissors Cut Paper Wrap Stone’, currently showing in Ormston House, Limerick. L isa M oran o utlines t he r ecent P alestine/Irish s tudent e xchange a t I MMA. Charlotte Bosanquet looks back at the various strands of her residency in New Lodge Arts, North Belfast. The Regional Profile for this issue comes from County Kerry, with updates from the Arts Office, Dingle’s Courthouse Studios, the Rural Artists Group and K-Fest, as well as artists Sue Leen and Nicole Tilley.

Reviewed in the Critique section are: ‘Futures: Series 3, Episode 1’ at RHA, Dublin; Jonathan Mayhew at Wexford Arts Centre; ‘Buzz and Hum’ at Limerick City Gallery of Art; ‘Frank O’Meara and Irish Artists Abroad’ at Dublin City Gallery the Hugh Lane; and ‘The Mistress of the Mantle’ at MART, Dublin.

As ever, we have details of upcoming VAI Professional Development Programme, exhibition and public art roundups, news from the sector and current opportunities.

Members of VAI receive a copy of the VAN delivered straight to their door. The News Sheet is also available to pick up free of charge in galleries and arts centres. The Visual Artists’ News Sheet Online offers our readers a platform to discuss a number of the articles and the topics contained in the print edition.
www.visualartistsireland.com