Lisa Fingleton discusses the fundamental values and ideas that have directed her career path. 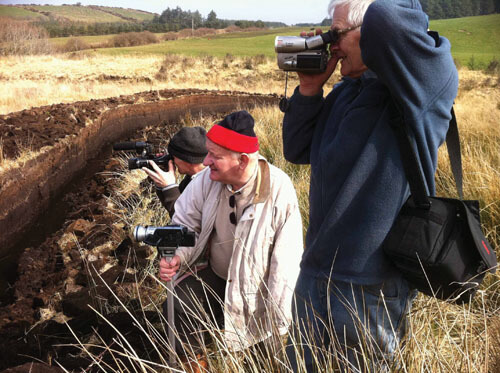 Lisa Fingleton, ‘Memory Through Media’ courtesy of the artist

This article explores my professional journey since graduating from the National College of Art and Design in 2005 and reflects, specifically, upon the three essential principles that underpin my work – participation, process and partnership. These concepts have been central to how I have sustained my practice over the years, both creatively and organisationally.

Prior to studying fine art, I had trained and worked as a community and youth worker. From 1994 –1995 I undertook the Postgraduate Diploma in Community and Youth work at NUI Maynooth, which included a three-month community arts placement in Edinburgh. Following this, up until 2000, I worked in various youth and community jobs in Ireland and abroad.

My experience of community work is that it is a practice and process very much focused on social change, collective action and participation. While I certainly went to art-college to explore my own creativity, I remained committed to finding ways of bringing about social change through art.

In the first year after I graduated from NCAD, I took part in over 20 group shows in Ireland and abroad. However, I felt I was running from exhibition to exhibition in a bit of a tailspin. While this flattered my ego, I couldn’t block the nagging questions in my head. Who am I doing this for? Who are my audience? Who am I trying to reach?

I loved having my own work professionally presented in the context of the white-walled gallery but felt that there was something absent. I missed working with communities and especially people who don’t traditionally have access to the arts. Maybe it had something do with the fact that I felt very privileged to be the first person in my extended family to have an arts education. Whatever the reason, I was certain that wanted to share the creative experience with others.

I quickly found myself back working collaboratively in the community context, but this time as an artist and filmmaker. Within months of graduating I was commissioned by Laois County Council to take part in the 2005 Laois Artist Symposium – I saw the notice for this opportunity on the VAI e-bulletin. I submitted a proposal that included a rationale and budget. Five artists, including myself, were selected.

I developed a project that involved interviewing over 90 people about their favourite place in the world. I really enjoyed chatting with people, explaining how the camera worked and letting them see themselves on camera, sometimes for the first time. The screenings seemed to have an extra energy because the people present were not just ‘the audience’ but engaged participants. I gained a lot of confidence from that project and also felt that I became physically stronger from hauling around a relatively big camera and tripod on my back for three weeks.

Looking back, I can see how many participative projects flowed from there. I became the filmmaker in residence with Kerry, Cork and Limerick County Councils from 2006 – 2007. The position was advertised in Film Ireland and formal interviews were held in Cork. To my knowledge, this was a once-off cross-county collaboration, though I continued to work a lot with the Kerry County Council Arts Office after the first residency.

A small number of projects were pre-scheduled, but I predominantly worked in a self-directed way. I designed programmes and projects in consultation with communities, schools and artists with the support of the arts officers. I found it was a really steep learning curve for me, as I had no formal film training at the time – except what I had picked up from art college. I remember having an awful nightmare the night before I delivered my first workshop – I had forgotten everything I thought I knew and woke up in a cold sweat. Thankfully it was just a bad dream!

In 2008 and 2009 I developed projects for the Lewis Glucksman Gallery, the Model, the Crawford and the Irish Film Institute, which were all about engaging artists and communities with digital film. For instance in the Changing Face project, I worked with 60 teenagers in Cork to make their own screen tests, which were exhibited alongside Warhol’s screen tests in the Lewis Glucksman Gallery. I enjoyed the fact that people could really engage with the creative process and create their own artworks / films. 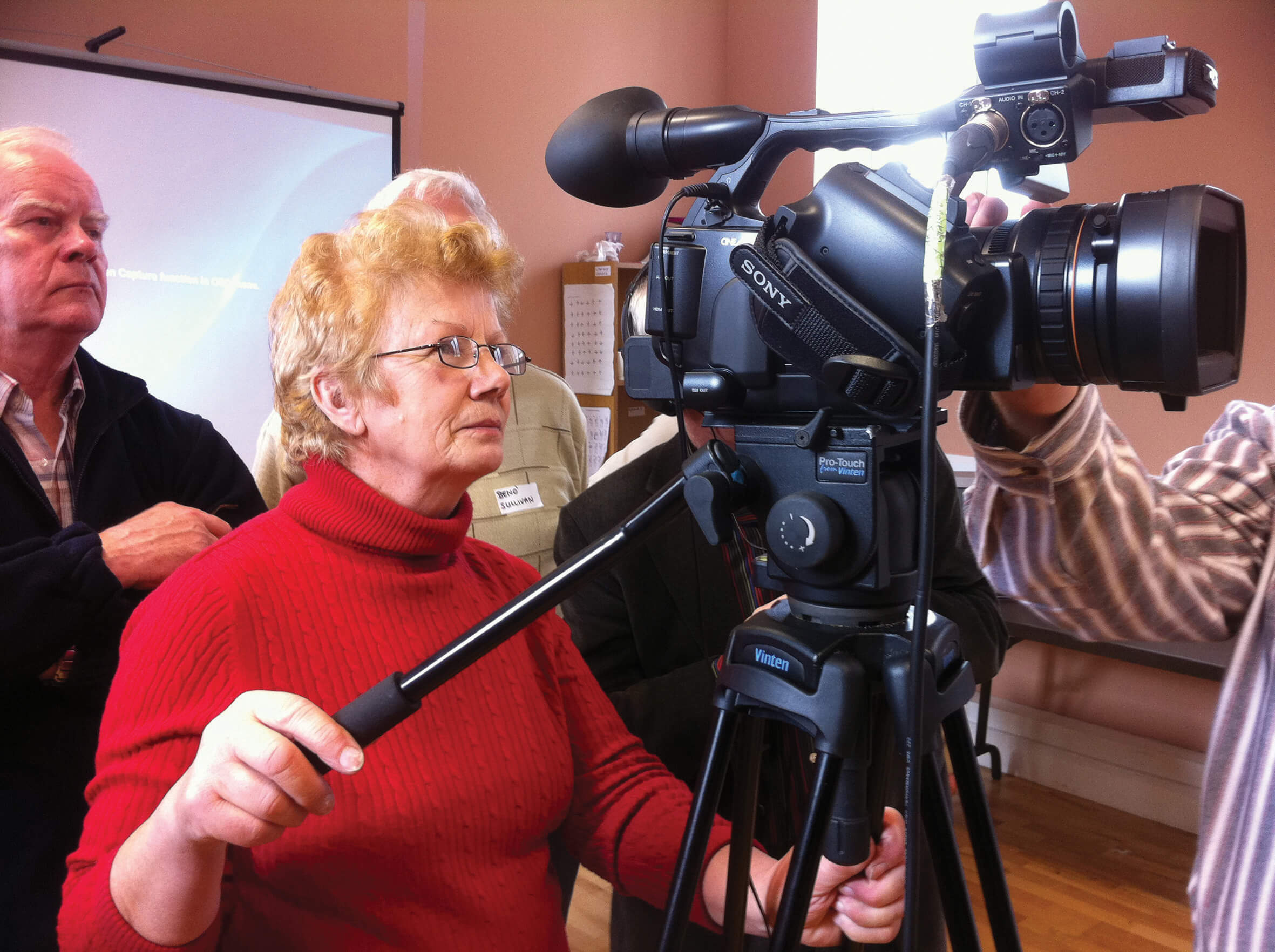 Lisa Fingleton, ‘Memory Through Media’ courtesy of the artist

Many of the projects up to then were short-term and funding led. I wanted to work on a longer-term process. From 2007 – 2008 I worked with Ireland’s only lesbian choir, Mná Mná, on a musical / film project called Outside I’m Singing. Initially we had no funding, though Cork City Council did give us a grant later in the process. We quickly realised we couldn’t pay for the use of copyrighted music, so we decided that the choir would write their own musical. This became the central focus of the film. It was an amazing process to witness. Under the expert guidance of musical director Evelyn Quinlan, the choir wrote a musical and had two sell out shows, as well as standing ovations!

The final film was presented as a five-part installation of the same name, at the 2009 Claremorris Open Exhibition. I was delighted to be awarded the Emerging Artist Award that year. I also received the Patronage Award from Laois County Council, which I used to fund the project. The Crawford Gallery, Cork hosted the screening for participants, friends and family, which was of course the most special evening.

This was a very important project for me. I felt it was a very positive experience for everyone involved. In the beginning many of the women were rightfully dubious about being involved in a filming process. Indeed, I was very wary myself, afraid that it would ruin the intimacy of the group. Everything was negotiated with the group and by the end the filming was an integral part of the process.

During 2008, I also got the opportunity to participate in ESODOC (The European Social Documentary Film Programme). Through this six-month programme, I got the chance to work with filmmakers from all over the world, which proved invaluable. A Travel Award from the Arts Council helped towards costs.

In 2010, IRD (Integrated Rural Development Company) Duhallow, North Cork invited me to facilitate a Leader-funded media project with their SAOI network of active retirement groups in the area. Most people had no experience, even with still digital cameras, and I was to lead them through the process of making their own films from start to finish.

There were 17 people in the group and I don’t think any of us could have guessed how rewarding that process would be. None of us could have predicted the level of camaraderie and friendship that would develop, nor the wonderful creative output. With co-facilitator Rena Blake, we negotiated everything together with the group. Participants started by creating short films that were shot in a day and then one longer film that developed over three months. They made five films over the year and a half. We organised a number of screenings as part of Bealtaine, which hundreds of people attended. We shared the films during transnational visits to Finland, Poland and the UK. The Grundvig Programme funded this element of the project.

Even through the project officially ended in May 2012, IRD Duhallow has a dissemination strategy in place. Participants regularly travel to local schools, nursing homes and community projects to screen and discuss the films. To me this is a great example of real and meaningful audience participation. The films are also available on YouTube and have enabled the Duhallow diaspora to comment and engage with the films.

While participation and process are essential, I also feel that building partnerships is vital. When I am approached now to do a project I always ask myself: who else could we involve in this project? This is important not just for financial reasons but also because in broadens the impact of the project and enables it to reach a bigger audience.

In 2009, I set up a project called The Happy Artist to support a variety of creative projects in North Kerry. With the assistance of an Arts Council Bursary Award I was able to collaborate with a vast range of groups who otherwise might not have had access to creative opportunities. One animation project involved a partnership between different agencies in Listowel: Listowel Writers Week, Xistence youth café, two secondary schools, the local cinema and the arts centre.

In 2011, I was commissioned by Kerry County Council to make a film called Inspired about Kerry artists. This would not have been possible without the additional support of the Leader programme. Then, Joe Murphy at St Johns Theatre Listowel agreed to host an evening around the theme of inspiration. Poets, artists and musicians all contributed to a memorable evening. Instead of just being an online video project, it became the focus for real community events.

In summer 2012, I was asked to do a project with Kerry Library supported by Kerry Arts Office. I worked with eight teenagers to create a film called For the Love of Reading with over 20 library users. We worked in partnership with Kerry Film Festival and the film was screened in Siamsa Tire in Tralee.

In prioritising issues of participation, process and partnership across my practice, I feel fortunate in arriving at a place where I often reach across a number of sectors for support: art, community and film. Where possible, I feel it is really important to collaborate and build bridges between different contexts.

As I final point, I feel it is important to mention that the organisation and funding of these projects has required a great deal of administrative time. For most grant and award opportunities I’ve had to prepare detailed applications. I reckon that each application takes at least one week when it is done properly. It feels a bit like gambling. Do I cancel other things and take the risk that it might pay off? The good thing about doing an application is that it helps to formulate my thinking. It helps to develop ideas that otherwise might never come to fruition and it also gives me the chance to have my work assessed by a panel of experts.

I am currently doing a Masters in Documentary Film in Goldsmiths College, University of London. I look forward to seeing where this will take me in the future.