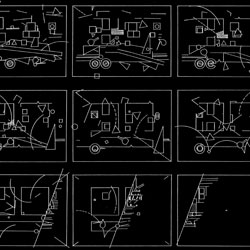 IFI & AEMI Projections Present: INDEPENDENT FRAMES
Curated by Herb Shellenberger, Independent Frames examines the work of American artists who approached film through independently-produced, frame-by-frame animations in the 1970s and 80s. Made primarily by artists with no formal animation training, the films demonstrate the wide variety of psychedelic, formalist, autobiographical and countercultural work being produced during this period, as well as the individualised techniques they inherited and refined from older generations of experimental animators. Films depicting erotic fantasy (Desire Pie), an incisive ontological study of things (Object Conversation) and a photographic animation of the passage of time (Hand Held Day) show how artists have conceptually engaged with ideas and visual techniques that animation’s remove from photo-reality can make possible.