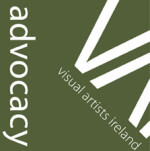 Many people profit when an artwork is resold. The full value of an artwork often isn’t seen on the first sale. It is common for visual art to increase in value over time, as the reputation of the artist grows. For this reason the EU introduced a directive that countries must introduce a system whereby Artists and their Heirs & Estates can benefit from third part sales by a professional party or intermediary, such as salesrooms, art galleries and, in general, any dealers in works of art.

In Ireland the threshold before the Resale Right becomes relevant is 3000 Euro.

In addition, Irish artists are experiencing serious and ongoing difficulties in collecting the royalties to which they are entitled. The Directive which introduced the right across the European Union in 2006 was transposed into Irish law via a statutory instrument rather than legislation. The weak regulations have resulted in a low level of compliance from the art market profession, in particular from galleries and art dealers, many of whom have largely ignored or avoided the right. The regulations do not provide an effective mechanism for the collection of royalties due to artists and their heirs. This has led to a continuing and unacceptable loss of income to artists. To remedy the government must introduce compulsory collective management as a means of collecting, administering and distributing the artists’ resale right.

This petition asks that as a matter of urgency:

Visual Artists Ireland and IVARO work on a consistent basis for the implementation of these changes.

Please sign now and ask your friends and colleagues to join us in this important work: sign here